Go on an An Art-and-Nature Element of Texture Hike

Time for a flashback!

It appears I never reported here on the fifth hike in our Art-n-Nature series.  That just won't do, so today, let me flashback to November 2013 in order to share with you about our Element of Texture hike. 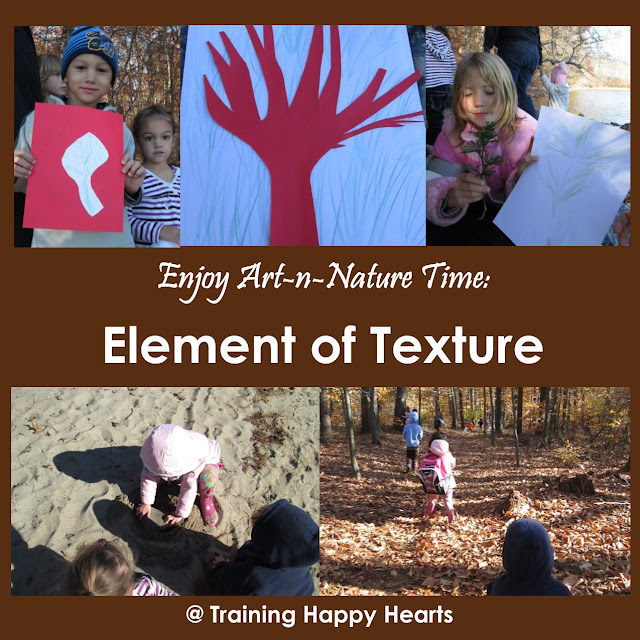 For our Texture Hike, a fairly large group of us met on a sunny, breezy, fall day in the 50's at an off-the-beaten path preserve called Betty's Neck. 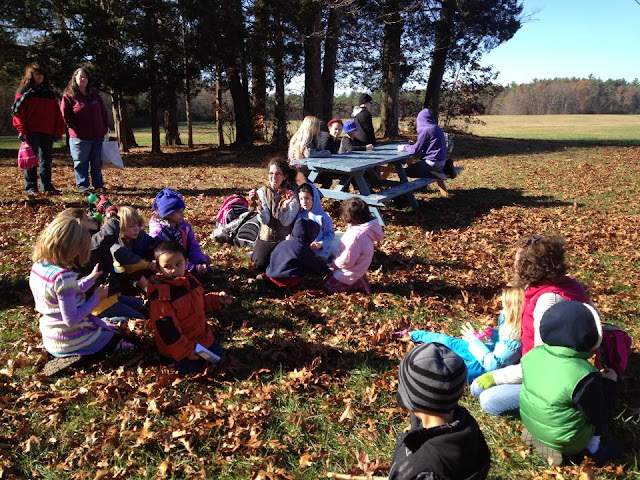 In a field not far from the parking lot, we sat together to share names and to review some basic concepts about Line, Shape, Form, and Color.  We also introduced the concept of Texture.

After our introductory chat, I handed out plastic bags and asked the children to collect objects of different textures as we hiked along trails.  With this, we set out to explore while finding something smooth, something prickly, something  rough, etc. 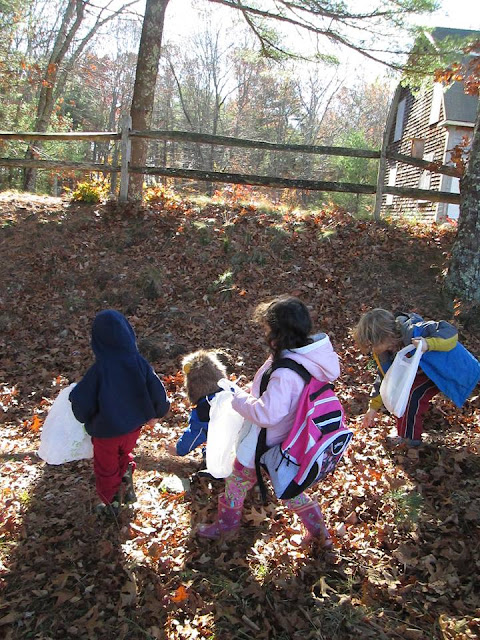 The children enjoyed the trails - as well as the "blockades" within them. 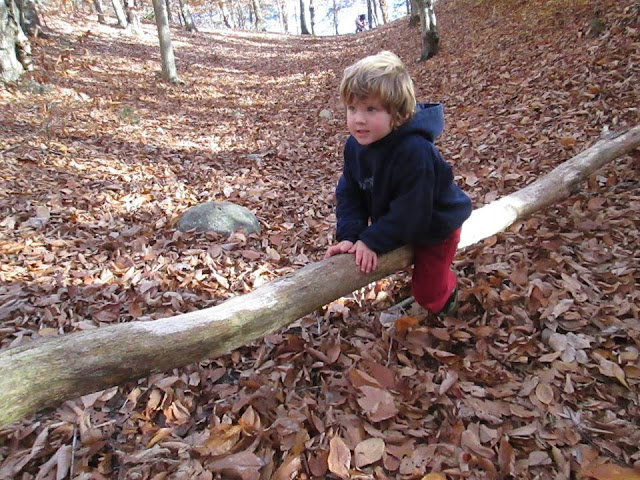 Once we got to a clearing, my intent for one art project was for the children to use their found items to create an interestingly-textured Andy Goldsworthy-inspired piece, but that never materialized.  For, we ended up coming out of the woods to a reservoir, where it became quickly obvious that the children wanted to explore the water's edge. 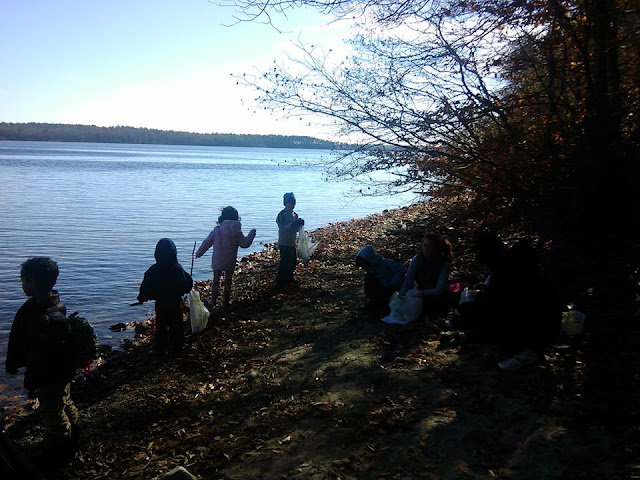 After setting down art supplies and snacks, I went with the moment and did the same, especially enjoying the tagging after my youngest as he explored the new-to-us area. 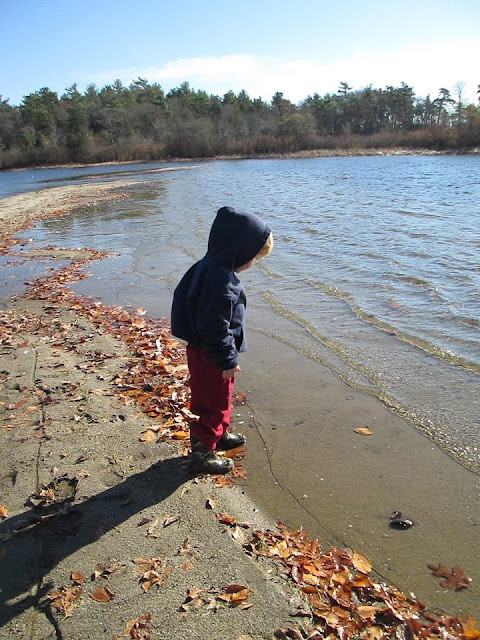 It was such a lovely place, even if many of the trees around us were already bare. 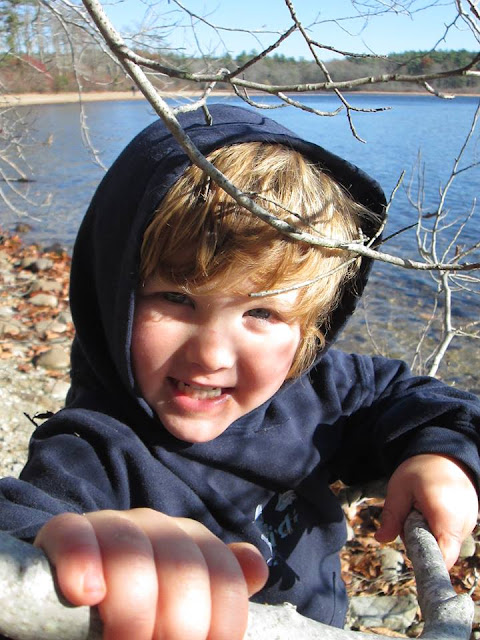 With water to look at, trees to climb over, and smiles to share, art just had to wait! 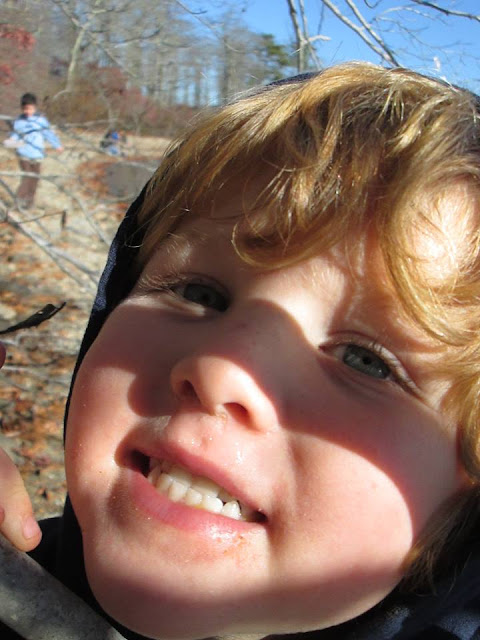 Finally, though, I gathered whichever children wanted to create art together so we could explore several project ideas based on Texture. 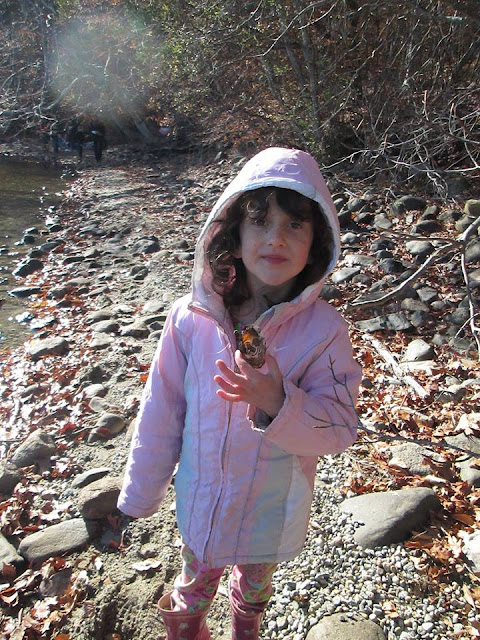 One simple idea was inspired by the beginning of a Diana Trout Art Journal Page.  Basically, the children and I shared our found objects with one another... 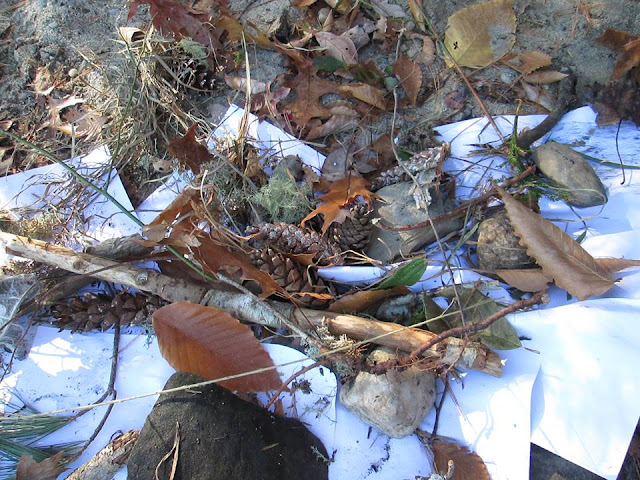 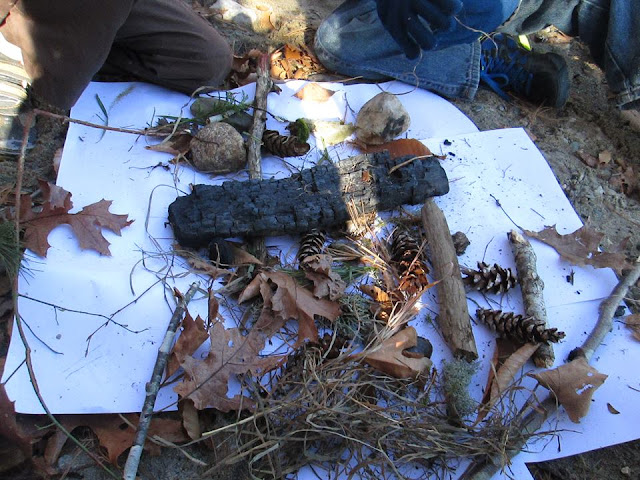 Then, I explained one simple idea, which was inspired by the beginning of a Diana Trout Art Journal Page.  Basically, I suggested that we might draw some shapes and do rubbings of different textures inside them.  Some of the children took this quite literally and rubbed with the found objects to transfer color rather than putting the objects beneath the paper to do color stick rubbings. 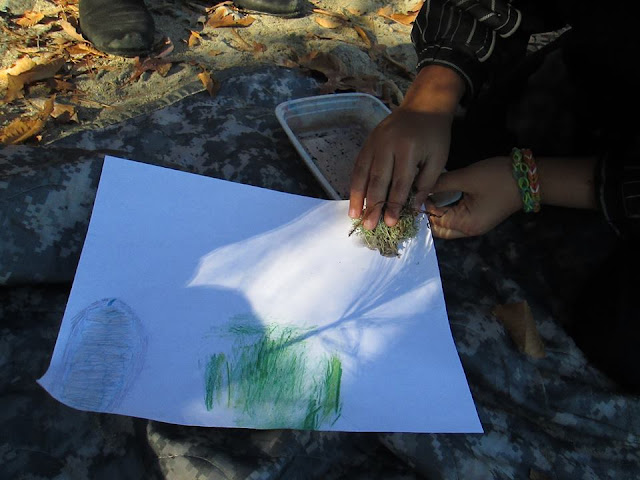 Another idea I introduced was that children could look at an object and simply try to sketch it, paying particular attention to how they might capture its texture. 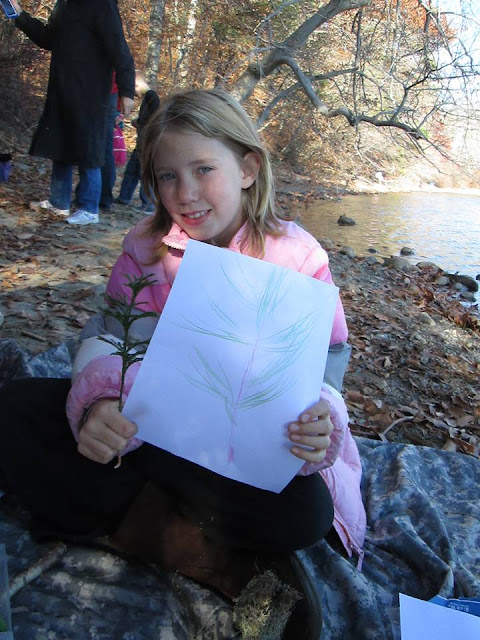 The final project I suggested was inspired by Hub Pages Animal Silhouettes and Patterns.  Our trail version of it was to create the silhouette of an object found in nature.  Then, using colored pencils, make a background for it that picks up on the texture of one portion of the object. Some children chose to combine the different projects to create their own.  Others chose one project only.  Others did multiple quick pieces. 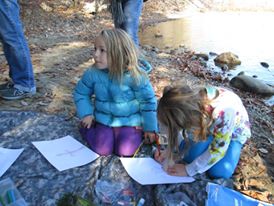 All faced cold air and wind when trying to work, which made creating the art and keeping cut scraps from flying off a bit challenging.  Somehow, we managed though. 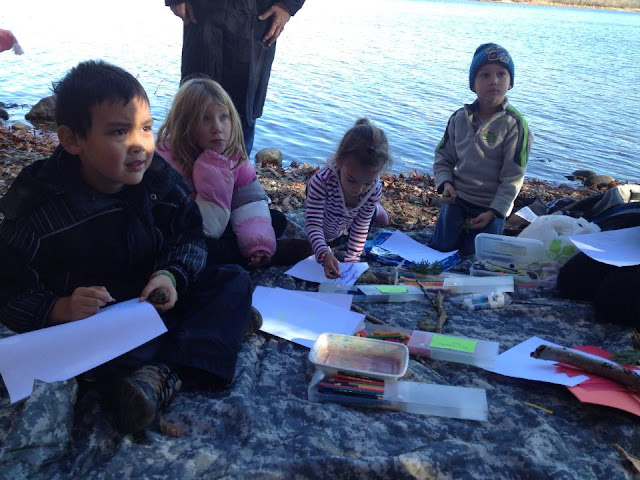 We used the colored pencils, crayons, glue sticks, paper, scissors, and other supplies I'd brought along to make art and used rocks and sticks to keep art and bits of paper from flying away. 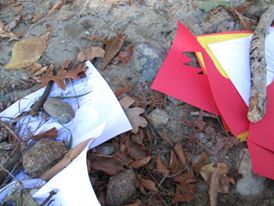 After our art was complete, we continued to enjoy the water's edge before hiking back to the lot. 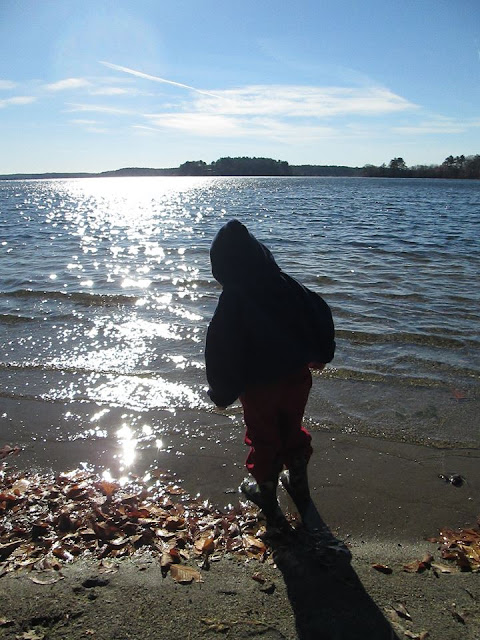 Little did we know it would be our last Art-n-Nature hike for over a year.  We thought we were just going to pause until the weather warmed again.  But, other initiatives took priority when the weather warmed, so we did not pick up with the series again until just two months ago.

Now, we have completed our first foray into exploring each of the seven elements of art and design outside with friends, but we have not completed our Art-n-Nature series overall.  Indeed, our club hopes to continue to meet once a month for as long as interest and inspiration hold fast.


What are your favorite art projects to do outside or on the trail?  I'd love to hear about them as inspiration for future club meetings!


Want to Know What We've Done on Our Other Art-n-Nature Hikes? 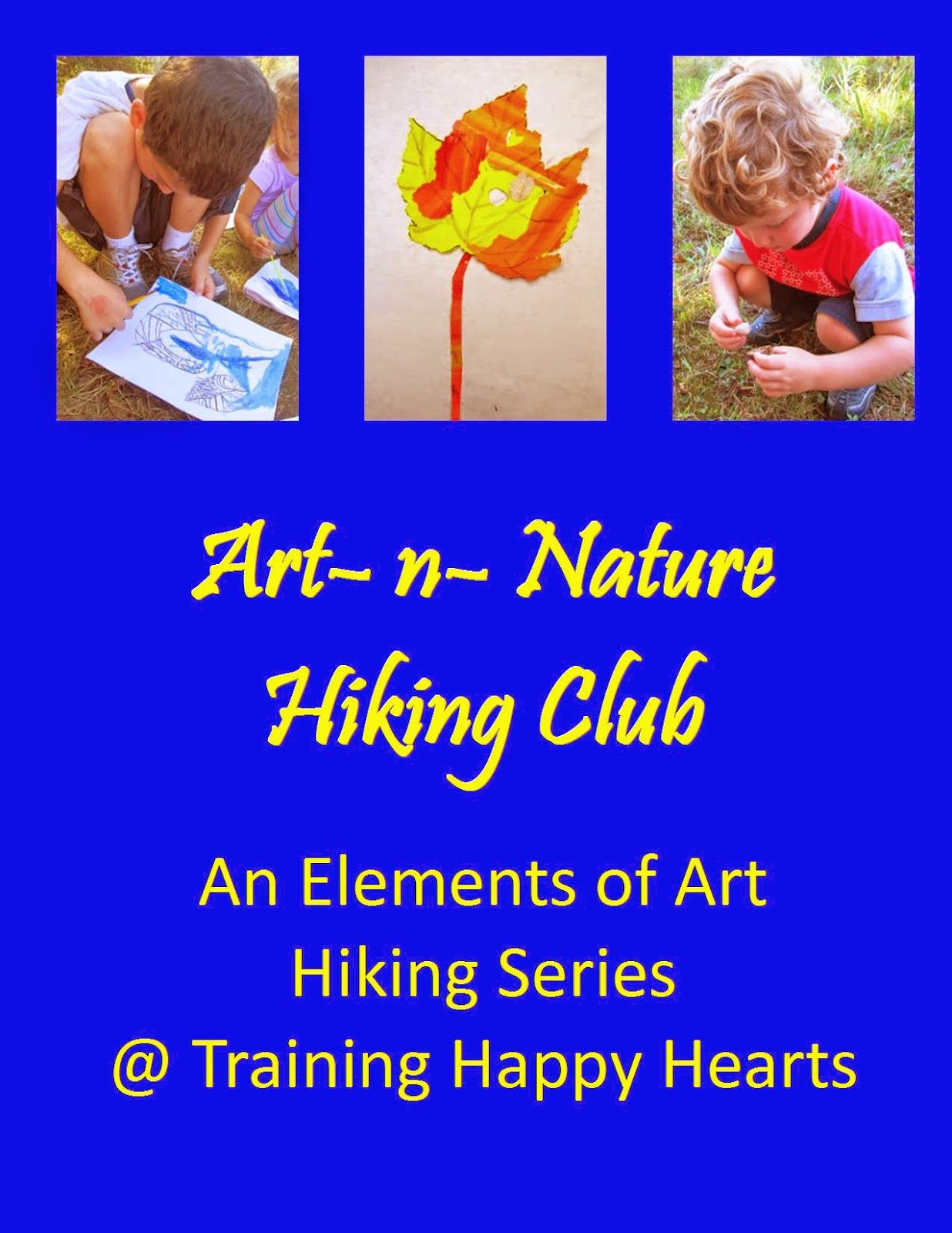