6 Lessons to Be Learned from St. Peter Damian

February 21 is the Optional Memorial of St. Peter Damian, bishop and doctor. 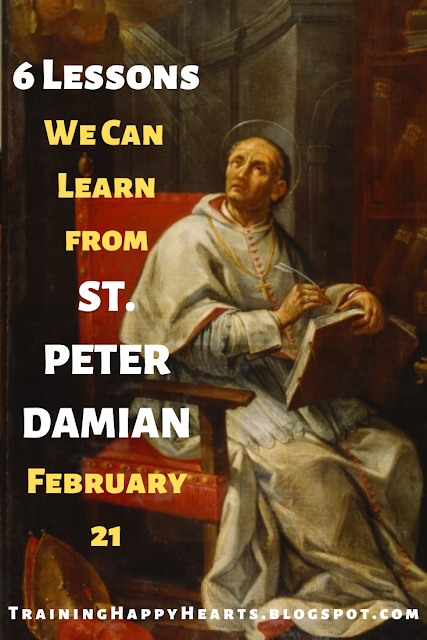 As I read about the life of this saint, considering how I might best share about him to my children, several "lessons" stood out to me. I am sharing those lessons here in case they might inspire you as you seek to teach the children in your lives about saints.

My intent with my own children is not to share these specific lessons, but rather to simply have the lessons in mind as I tell my children each portion of St.Peter Damian's story and, then, chat about it, encouraging my children to voice their own "lessons".


What Lessons Can You Learn from St. Peter Damian's Life?


1. Do not fret. Provisions come and, with them, opportunities to express great gratitude.

Peter was born in 1007 in Ravenna Italy as the last of seven children.

At a young age, Peter was orphaned and was taken into the shabby care one of his brothers who treated him poorly forced him to do menial tasks.

In time, however, Peter was entrusted to the care of his eldest brother Damiano who was an Archpriest in a parish near Ravenna and sent Peter off to good schools, which enabled Peter to become a professor.

In gratitude for his eldest brother's care, Peter added the name Damian to his own.


2. Seek lasting joy for yourself and for others.


Peter's first biographer St. John of Lodi recounts that when Peter was a boy, he found a coin, delighted over it, and thought he would buy a toy or a cake. Peter then suddenly realized that anything he bought would give him only momentary joy. Thus, he changed his mind, took the money to a priest, and had a Mass said for his deceased parents, aiming for their eternal joy.

3. Put others before yourself and listen for your personal calling.

He says that, during the lunch, Peter chose to serve himself fine white bread while offering the blind man a darker, lesser quality bread. At that moment, Peter felt like bone had gotten stuck in his throat. He chose to repent of his selfishness, exchanged his bread with that of the blind man, and discovered the feeling of the bone in his throat disappeared. As a result, Peter decided to consecrate himself to God alone and to embrace a monastic life.

Driven by a need for solitude, meditation and prayer, Peter Damian gave up teaching in the year 1035 and became a priest at the Camaldolese monastery of Fonter Avallana. There, he quickly became a spiritual guide for the monks and, thus, was invited to teach at other monasteries, which he did.


After returning to Fonte Avallena, he was elected Prior and reorganized the rules of the order to return to its original spirit and purpose. This drew men to the monastery, and inspired the establishment of new houses in neighboring regions.

Peter Damian's zealous activity drew the attention of the Bishop of Ravenna, and, although Peter Damian was a monk at heart, when he was asked for assistance by the bishop, he obliged and left the quiet and recollection of the monastery.

Then, by 1057, Pope Stephen IX called Peter Damian to Rome to help with clergy reform. For, at the time, the Church was afflicted by two evils: Simony, or the buying and selling of church offices, and Nicolaism, or the non-fulfillment of celibacy.

The Pope made Peter Damian Cardinal and Bishop of Ostia and, in this position, Peter Damian continued to work fervently for peace and reform. He was called to attend synods, settle disputes, and fight abuses. In this capacity, Peter Damian was sent on missions to Milan to quell an uprising, to Cluny to defend the rights of Benedictine abbots against the Archbishop of Macon, and more.

5. Live here in a way that leads to eternal life and leaves a legacy for others to inspire them to do the same.

After years of work as a reformer and papal legate, or representative of the pope to foreign nations, Peter Damain returned to his hometown of Ravenna and was overtaken by fever while visiting the Benedictine monastery in Faenza, where he died on February 22 surrounded by monks who were praying the Divine Office.

Immediately after Peter Damian's death, he was acclaimed a saint by the people. Then, in 1828, he was proclaimed a Doctor of the Church by Pope Leo XII.

A scholar, a preacher, a monk, a cardinal, and a person who dedicated himself to fasting, penance, and long hours of prayer, St. Peter Damian greatly impacted those around him and left a legacy of letters, sermons, biographies, stories, and poems that encourage others to restore discipline to their lives.


6. Let your hardship seed blessings for others.

Peter Damian undoubtedly had great impact on the church and the world - and much of his impact was made one person at a time.

Having experienced the burden of poverty in his childhood, Peter Damian was known to have a heart for the poor. It was said to be an ordinary thing for Peter Damian to have a poor person or two at his table and to minister personally to the needs of the poor.

Having lived with injustice in his youth, Peter became a staunch advocate for what is morally right.

A strong figure and one of the greatest reformers of the Church in the Middle Ages, Peter Damian preached of penance and encouraged people to live Holy lives not only by his words, but by the examples of his life, asking others to do only what he himself would do.

Following in Peter Damian's footsteps, might we, too, seek reform, justice, prayer, fasting, and almsgiving? And might we always remember the wonderful words of St. Peter Damian that echo through the ages to speak to us today:

Do not let your weakness make you impatient. Instead, let the serenity of your spirit shine through your face. Let the joy of your mind burst forth.


By the way, this quote - in whole or in part - would make a wonderful piece of copywork, studied dictation, or note in a commonplace book, I believe.


Some other child-friendly ideas for remembering St. Peter Damian might be:

Grant, we pray, almighty God,that we may so follow the teaching and example of the Bishop Saint Peter Damian, that, putting nothing before Christ and always ardent in the service of your Church, we may be led to the joys of eternal light. Through our Lord Jesus Christ, your Son, who lives and reigns with you in the unity of the Holy Spirit,one God, for ever and ever.

St. Peter Damian, pray for us.