Learn Cursive the Early the Easy Way {A Review} 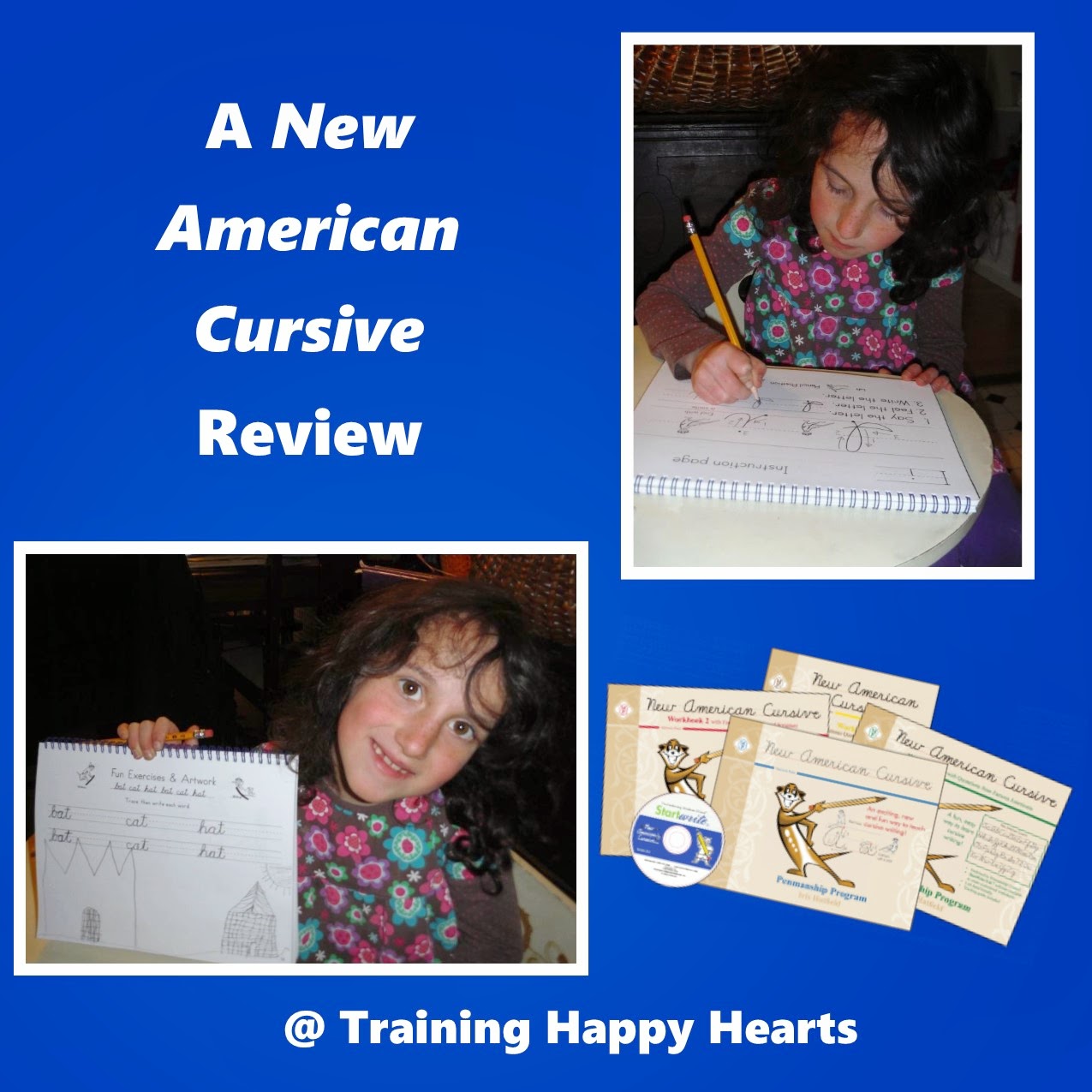 Disclaimer: I received a FREE copy of this product through the HOMESCHOOL REVIEW CREW in exchange for my honest review. I was not required to write a positive review nor compensated in any other way.
Some links may be affiliate ones.

My daughter struggles to read, but loves to write letters and has shown increased interest in learning cursive over the past year.  So, when an opportunity to review New American Cursive:  Penmanship Program Workbook 1 by Memoria Press in exchange for an honest review came up, I took it!  I knew my little girl would delight in having a book of her own to learn and practice cursive penmanship with.

What Is Memoria Press?

Memoria Press is a family-run publishing company that produces simple, effective, easy-to-use Classical Christian curriculum for all ages.  Since Memoria Press was founded by Cheryl Lowe in 1994, it has exploded with popularity among home educators and private schools and continues to develop new materials that focus students on the rich tradition of classical education.


What Is New American Cursive?

These were some of the questions that came to mind when I first read the title of the workbook my daughter has had the chance to review.

Quickly, those questions were answered.

While many American schools these days have been dropping cursive writing programs, classical schools - be they homeschools or traditional brick-and-mortar ones - continue to embrace the many practical and developmental benefits of cursive penmanship.  In doing so, they promote the ideas that cursive penmanship:

That said, the hard truth is that even if learning cursive is good for children, it is not always easy for them.  Some children struggle when learning cursive letter formations and connections.  Their challenges really put a damper on an otherwise positive experience.  That is where New American Cursive comes in.

Irish Hatfield, a woman with over 35 years of experience in the handwriting field, developed New American Cursive with all learners - including struggling learners - in mind.  Within the program she incorporated easy-to-follow, multi-sensory methods to aid the learning of motor skills necessary to write well.  She also developed New American Cursive as a resource that makes "old" cursive "new" by:

Further, while retaining the traditional beauty and practicality of cursive writing, New American Cursive is designed to hone students in on ccuracy and legibility, while adding a bit of space for creativity, too.

My daughter was delighted when her copy of the New American Cursive workbook came in.  How could she not be at the thought of a book we'd gotten just for her, which would help her to learn and practice how to write with loopy letters like Mom and Dad can? 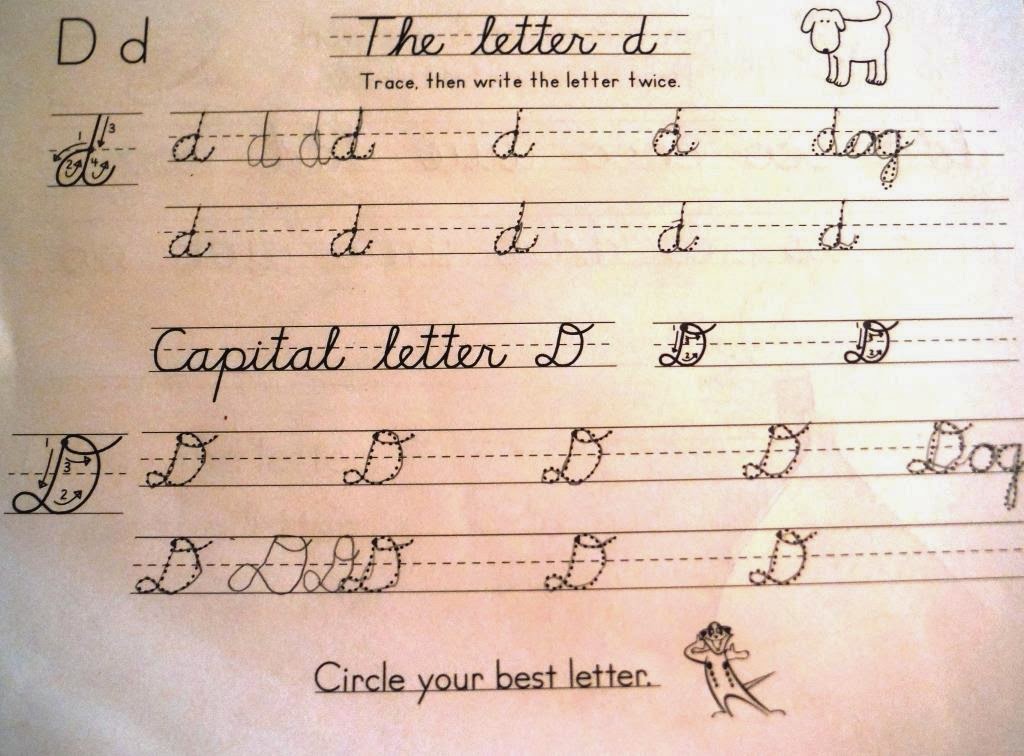 Immediately, my daughter and I sat down to begin her penmanship practice. Just as quickly, she noticed that some of the letters in New American Cursive workbook look different than the cursive ones she had seen before.  In fact, since we had previously practiced cursive a's and d's through the chant, "curve line up, rock back around, touch the top and swoop on down", my daughter immediately commented that the New American Cursive letters looked different.  The lower case a and d did not have the slant line up to the top of the circle.

I explained to my girl that just like printed type has different fonts, written cursive does, too.  New American Cursive is a simplified written font that makes learning handwriting quicker and easier by using less strokes to make the same letters.  Like many children, my daughter was pleased with the idea of taking a simpler, quicker route to mastering a new skill.  And, so we were off. 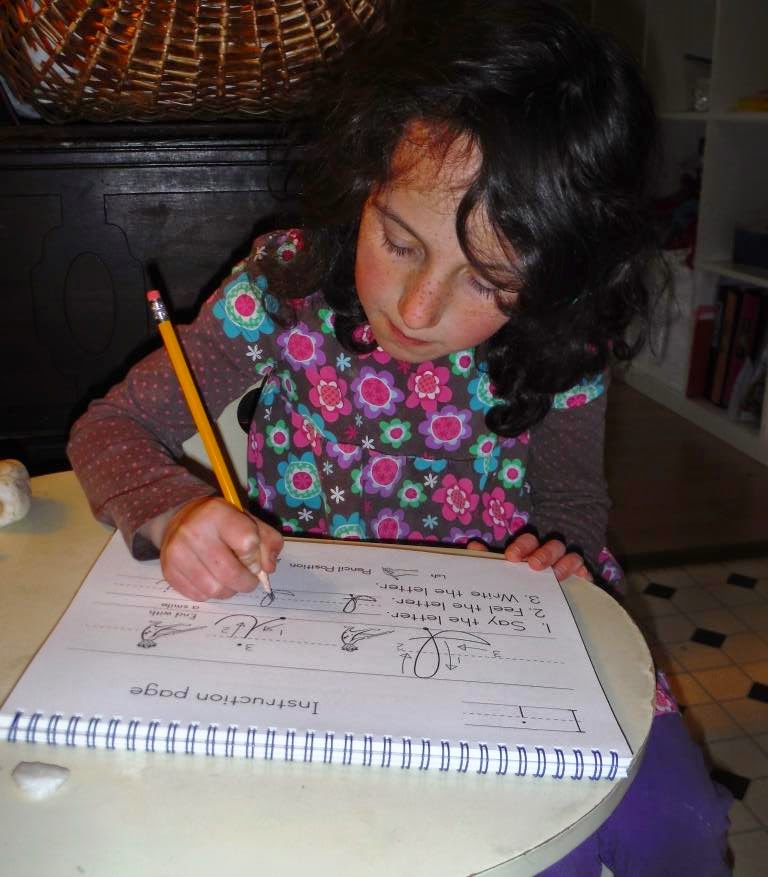 During handwriting times, my daughter followed Mr. Meerkat in learning how to write cursive letters.  She used the large printed model on the "Instruction Page" of each newly introduced letter to say, feel and write the target letter.  (Well, usually she did this.  In truth, sometimes, she did not actually SAY the letter, but she did trace and write it.)  Then, she traced the capital and lower-case form of the letter in a smaller size. 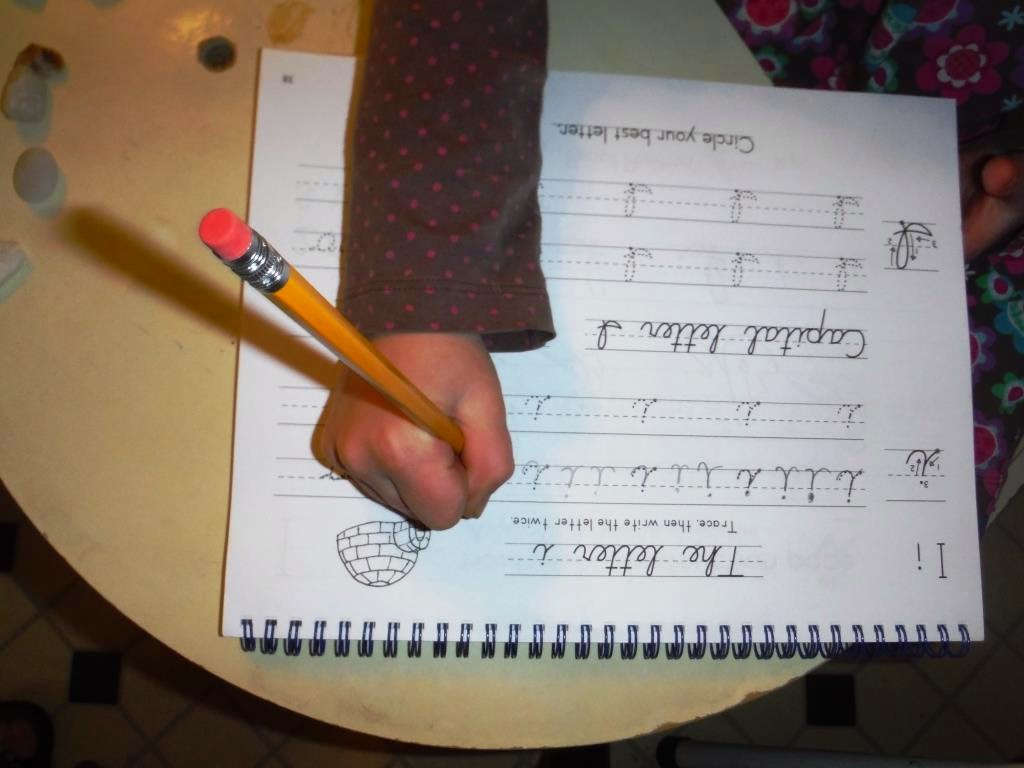 On the next page of each introduced letter, my daughter followed the numbered arrows and dotted lines provided to trace the lower-case and capital form of the target letter on appropriately-spaced lines.  Since I am not a stickler for repeating a skill once you've done it sufficiently, my daughter did not always trace all 10 or so models of each letter, nor did she always circle her best one as directed.  She did, however, use spaces between the dotted model letters to write the letters on her own. 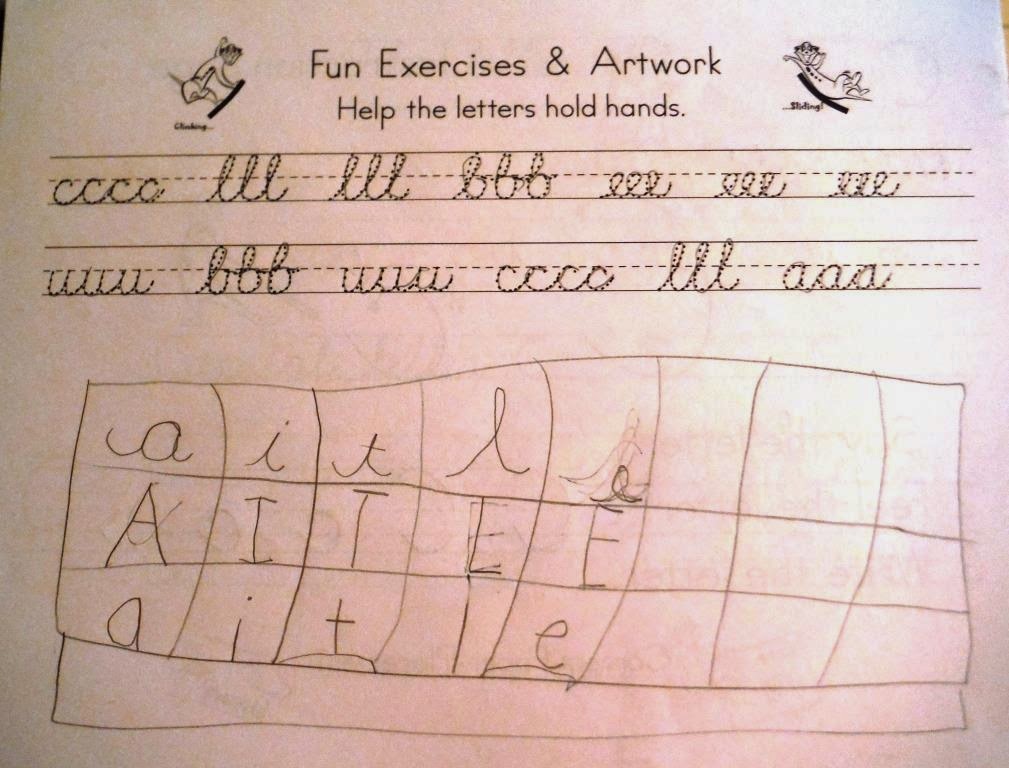 Then, my daughter turned to the "Fun Exercises & Artwork" page, where she traced the letters shown and used the space below them to do as she wished.  Sometimes she chose to write her own letter boxes.  At other times, she drew or simply opted to skip doing anything at all in the large, blank creative space. 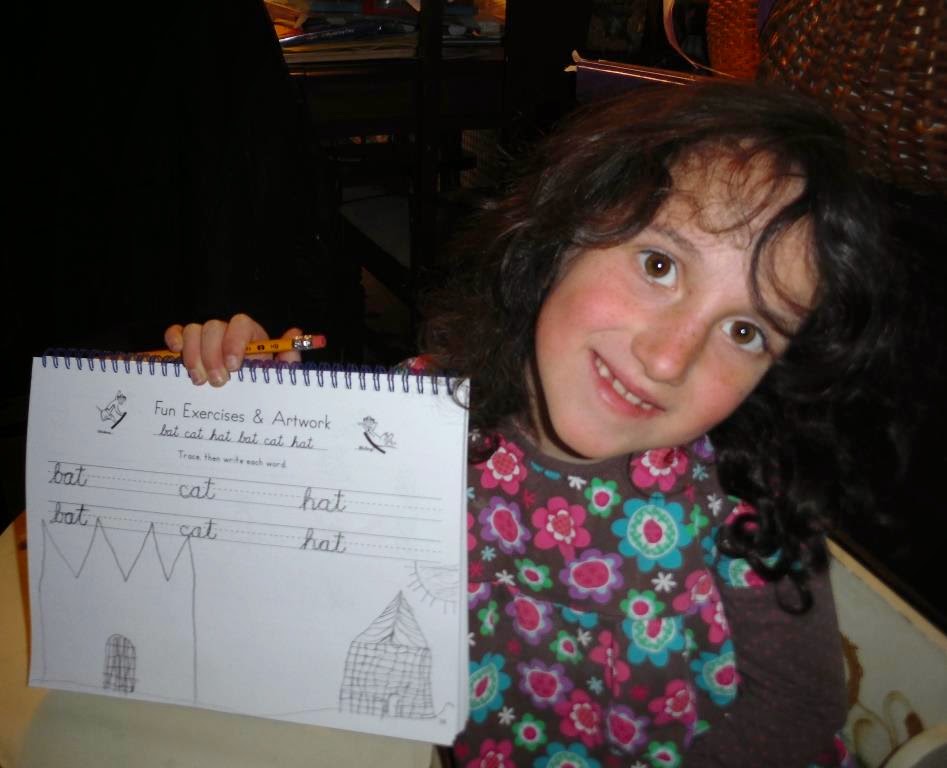 Although my daughter always used the three consecutive learning, practice and fun pages for each letter, she did not do the letters in alphabetical order as they are presented in the book.  Instead, she moved ahead to practice the "n" and "i", because those letters are in her name.  And, sometimes, she skipped forward  or backward to do letters that have similar stroke style and order. For example, since a lower case "a" and a lower case "g" both rock around and go back up, she did those letters one after the other.

When my daughter was not using her penmanship book, I browsed the Teaching Guide included in it which details things such as: 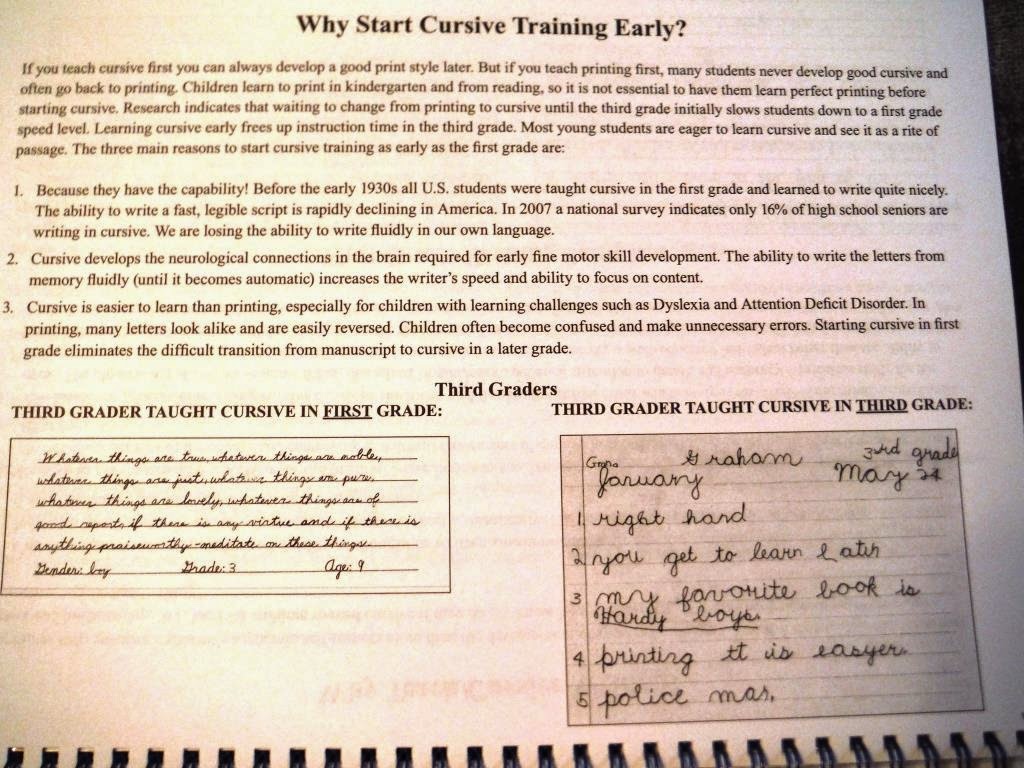 Of course, because we take a rather relaxed approach to learning in our home, choose to avoid most testing, and tend not to promote a lot of top-down direction for what lessons have to be done when, for how long and in what way, we opted not to test our daughter weekly on her penmanship as suggested.  Rather, I just noted her developing skills as she worked in workbook and also how she applied her new learning, consolidated with prior learning, in self-selected activities, such as playing school. 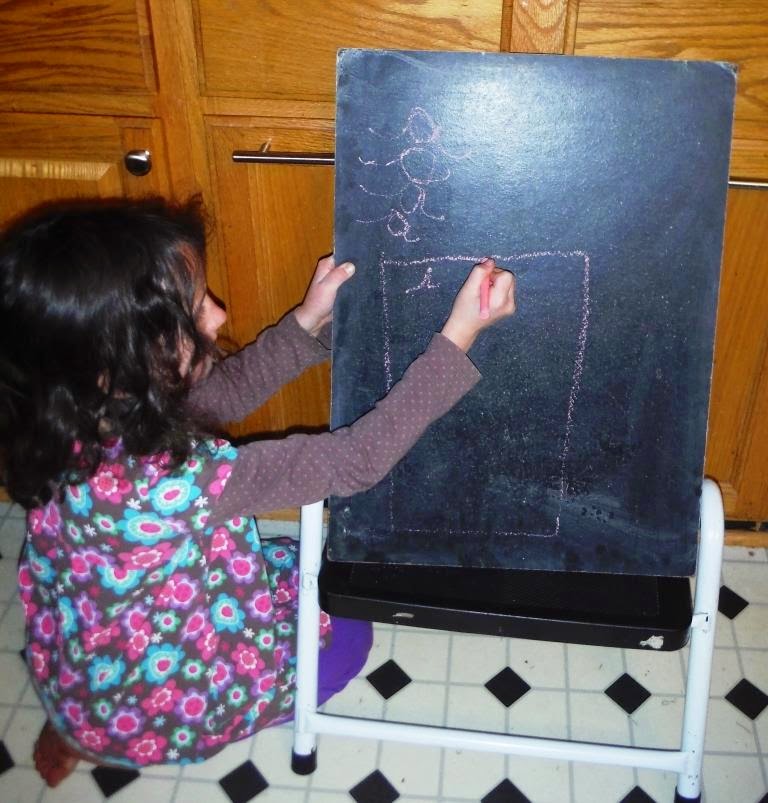 For, yes, even relaxed homeschoolers play school in traditional ways sometimes.  In the picture above, my daughter was playing school after using her handwriting workbook, and, although obviously she was choosing to still opt for a slant line up on her a's, she was delighted with the idea of writing cursive after having practiced New American Cursive. 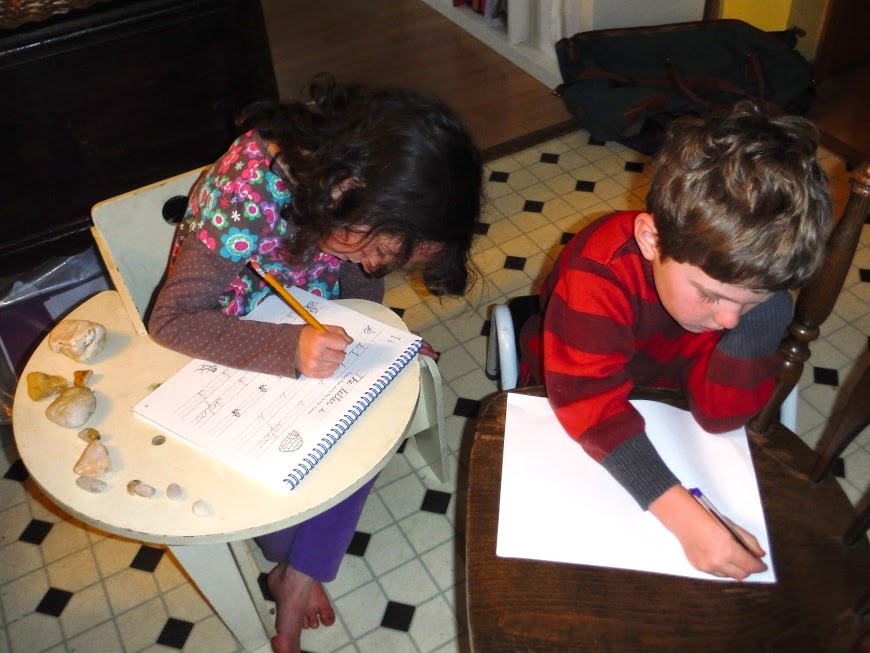 The goal of New American Cursive:  Penmanship Program Workbook 1 is to get young children writing confidently and accurately in cursive.  So far, our experience with the workbook is that it meets that goal.  Not only has my daughter been making progress with cursive handwriting, but her younger brother has shown an interest in learning it, too.  Sometimes he sits himself next to my daughter, grabs blank paper and pencil or whiteboard and marker, and tries to follow along.  In my book, that is success!

Some things I particularly like about the workbook are that it includes: 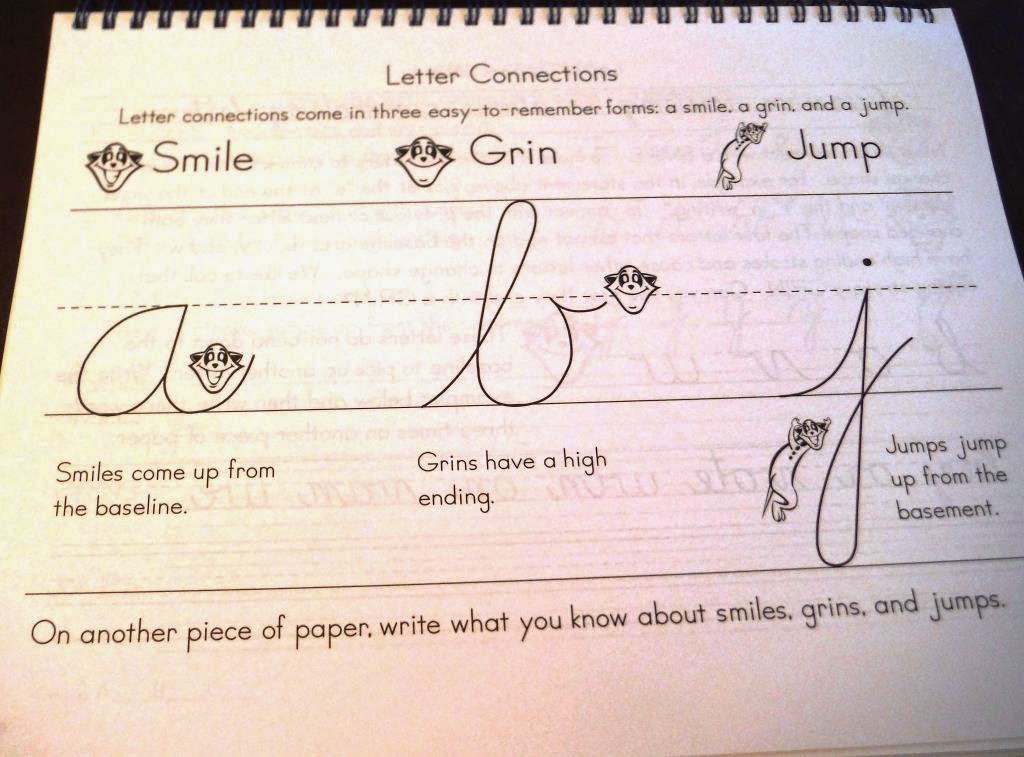 The only things I did not care for as well were personal preferences that were easily dealt with: 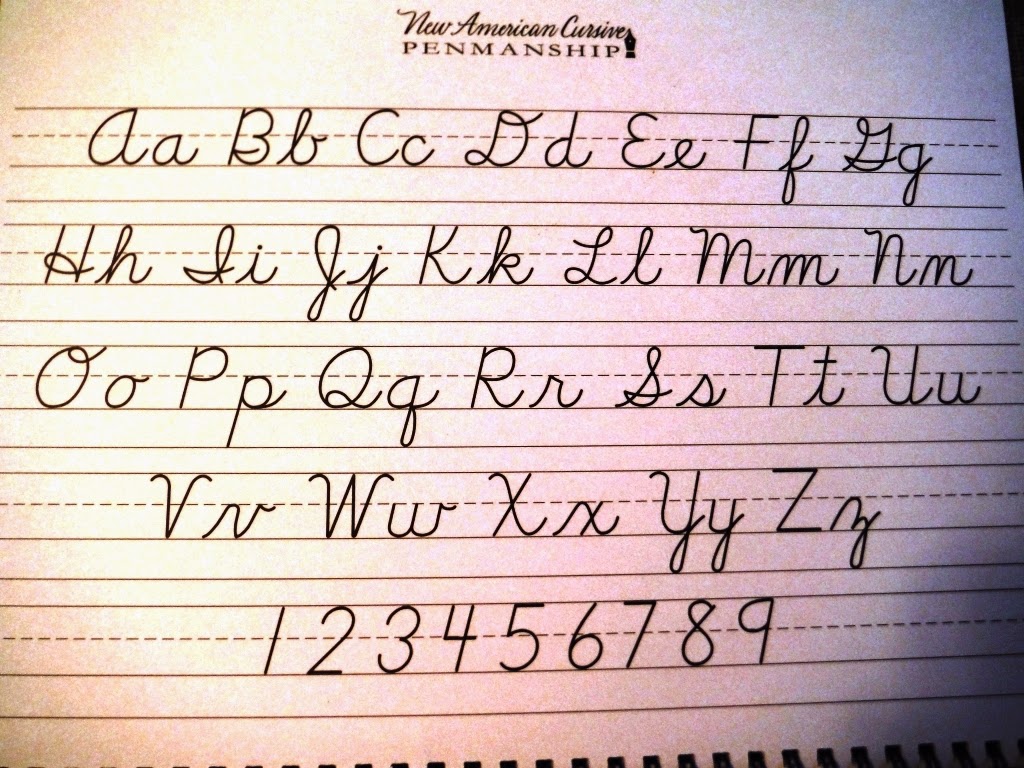 As for my daughter, when I asked her for her review of New American Cursive:  Penmanship Program Workbook 1
she said:

I like it.  I especially like how you get to draw pictures. I can now write my name.  I want to finish the book.


And, that, my friends, sums it up:  The workbook, in our experience, is a straight-forward, simple, enjoyable tool for learning and practicing cursive handwriting with young children!

Check our samples of New American Cursive at the Memoria Press website.