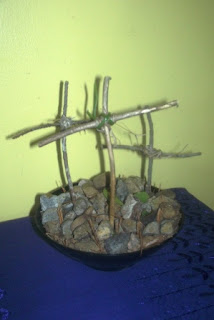 This past Monday, while the kids and I were enjoying the unseasonably warm winter we have been having, I suggested that we make a piece to put on our Lenten Liturgical Table.  Within minutes of my suggestion, Luke and Nina and I were completely immersed in creating a seasonal craft with a little “help” from Jack.
Together, we discussed what we had outside in our yard and how it might remind us of the season.
I found a twig and wondered aloud what it might have to do with Lent or Easter.  The kids, of course, said, crosses.  So, we broke the twig into two bits and looked about for something to make it into a cross.  Luke wanted to go inside for glue or tape.  I suggested that we could probably find something to bind the two parts of the cross together outside.  Nina and He were up for the challenge, so we hunted for binders and finally found long, shriveled leaves from plants which might work.

As we tried to wind and tie the dry “strings” around the twigs, however, they often broke.  The kids began to get frustrated, so I helped them with this part of our craft.  While I did, I made connections to a book we’ve been reading on Fridays, The Story of the Cross: The Stations of the Cross for Children.  I mentioned how a man had helped Jesus carry the cross for a portion of his journey to the cross, how a woman had helped by wiping his brow, how any had helped by walking alongside Jesus, and, of course, how Our Father had helped by never leaving His Son and, ultimately, welcoming Him into Heaven, which was a huge gift for us, too.  (Amazing how much theology can be discussed when winding bits of dried plants around sticks to make crosses!)
Then, cross made, the children hunted for “a hill” to stand the cross on.  Luke and Nina did not like the idea of small, upturned planting pot, where we could pop the cross through a bottom hole, but, rather, wanted to mound of muddy dirt.  When they suggested this, all I could picture was the drama that would unfold as we tried to transfer the mound inside to the liturgical table and, then, 20-month old Jack using the mud to create a sensory experience for himself, spreading it all over the table and floor.  So, I suggested building the hill in container.  The kids were agreeable to that idea, but could not find a container outside that they liked.  A quick jaunt inside produced a small black bowl we were all happy with.
Nina began to happily mix up a batch of very soupy mud, using dirt from the yard and water from a puddle by our car.  I suggested that her mix might be too wet to stand the cross in and recalled the Temptation of Jesus in the desert, suggested we try to gather some sand instead.  Luke piped up that Jesus was no longer in the desert when he was crucified, but that there were rocks around.  So, we all tramped to the gravel in our back yard to mix dirt and rocks into Nina’s mud soup in order to create a base for the crosses.
Once we had the bowl filled and the cross in it, the children recalled the other two crosses alongside Jesus’, so they gathered materials for creating those.  Since we spotted one long green plant in the yard, we decided to use that as a binder for one of the crosses.  It was more malleable than the dried plants we’d used for strong before, and opened up a brief discussion on how it might contain more life-giving water.  Since only one of our crosses had the “alive” green on it, the children decided that cross should be our “Jesus” one, since Jesus might have died on the cross, but he did so to offer life to us all.  (Again, isn’t it amazing the theology that plant strings can tie into?) So, we re-arranged the crosses in the bowl.
Finally, we poked some dry, broken pine needles into the dirt and rocks as grass, before Luke decided we needed more hints of the life to come on Easter, and carefully placed some small green leaves at the foot of the cross.  Thus, our Lenten craft was completed, and Nina carefully, yet eagerly, carried it inside and placed it as far back on our Liturgical table as it could do, so baby brother would not be tempted to destroy it.
This activity was another example of how we are letting the Spirit lead us in observing our Lenten Journey.  It was spontaneous activity that engaged us in crafting and conversation which spoke to my children’s interests and understanding.
What activities are opening up opportunities for you and your children to observe the season?  Please share in a comment or by Linking up anytime this week below. 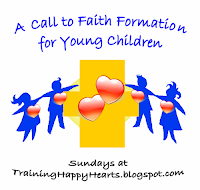 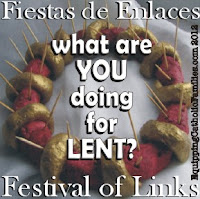 Sharing at Catholic Icing and Equipping Catholic Families, where you can find other wonderful faith-related ideas!