A couple of years ago, I found myself embracing the exercise of selecting a single word to guide me in new year.  Then, as 2014 came to a close, I began to think about what new word might guide me in 2015.  Before long, I realized that a single word would not be my charge for 2015.  Rather, a phrase would be.  On the very least day of the year, it came to me.

As I shared last year:

...after prayer and in the midst of typical daily activities, I heard a whisper in my heart, that became an echo in my mind, which stirred an "aha" in my soul:  ACT!

So often I tell my children that I want them to listen and act.  I know that my Father wants the same of me.  Not just to listen.  Not even just to acknowledge that I have heard.  But to act.

To act upon each of the roles I am called to in my present existence.

To act with immediate and intentional choice each time I answer one of my own favorite questions -- "What can I do to make this moment better?"

To act on the stirrings of soul that I am becoming more and more aware of.


How did I do with listening and acting?

Sometimes I was spot on with acting with love, faith, purpose, integrity, virtue, and the like as I went about fulfilling the roles, making choices, following stirrings of soul...  Other times?  Well, let's just say I am grateful that Our Lord is a merciful one and constantly welcomes me to draw closer to Him despite how human I am and how often I must seek reconciliation.

Let me also express how delighted I am that Our Lord can be so firm yet gentle.

About a week ago, out of nowhere, I was struck by a firm, yet gentle prompt for my 2016 word while I was in the midst of one of my personal "Mommy Retreats".  (That is, while I was listening to Catholic audio as I cleaned and organized all by myself when my husband - bless him - had the kids out.)  The word that came to me was not spoken on the audio, but rather came suddenly into my mind and heart:

Then, I laughed at myself.

"I don't 'enough'.  I simply recognize what is enough, give thanks for it, and carry on with how I am prompted to receive or gift forward whatever enough I experience."

Not the most eloquent, nor profound thoughts, I know, but the ones I heard.

Enough Was Not Enough

Thus it was I began today thinking that "enough" was "THE" word for me for this year.

Ha!  God has such a sense of humor.

For, at this morning's Holy Day mass, I was given another word:


As I listened to our pastor's homily, what I am coming to recognize as an undeniable prompt told me, "This is for you, Martianne.  This word.  This idea.  Today."

Yes, the whisper was gentle, yet firm and clear at Mass and all throughout this day, from the challenging moments to heartwarming ones. 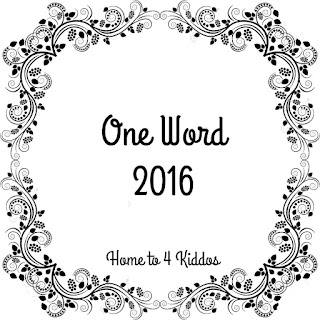 Have you, too, heard gentle, yet strong whisperings in your heart as you enter into 2016?