How I Found Calm Among the Chaos 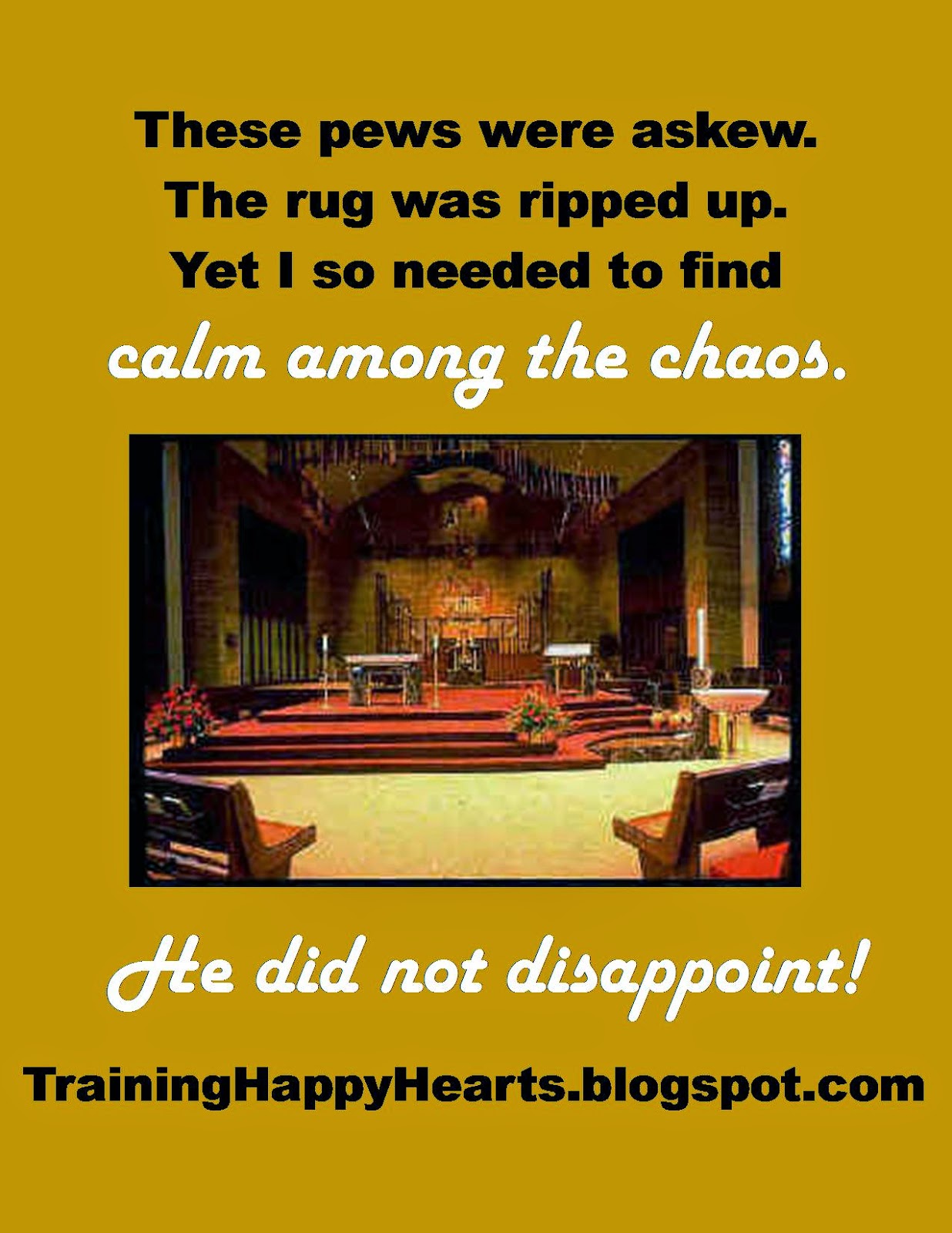 A week ago Sunday, I learned that a teenage girl I know had left this world.

It hit me hard.  Another young girl gone.  Just like my niece six months ago.  Why?

It makes so little sense to me.  Yet, I trust in Him.  I know He offers mercy, grace and healing.

So, after crying for a short period and praying, too, I carried on with Mom duties -- duties which precluded further obvious mourning since my young children did not need to learn about the suicide.

Inward mourning is hard, though.  So, the next day, despite the fact that we were visiting my husband's family in another state, I asked him if I could go to a church for a short while to be alone.

Love that my husband is, he agreed.  He knew that as much as he wanted to be with his earthly father, I needed some time alone with our heavenly Father and His Son.

So, off I walked to a church that we had been to on past visits.

While I walked, I passed a football player who was running to catch up with his team, a band and color guard group that was being berated by their leader and a man who was peering through a fence at a girls soccer game.

I wondered if the football player would be teased, if the band leader's bark would be the last straw for one of the teens he was yelling at and what the relationship might be between the man who was surreptitiously watching the game and whichever girl he was there to see.

As thoughts crossed my mind, I prayed.  May light, love and hope reign in all these people's lives, not despair and negativity.

Then, I arrived at the church, where I was chagrined to find chaos, not peace.

Extension cords propped the doors of the church open, powering loud machines which battered and buffed the stone exterior of the church.  Inside the church, obvious work was in progress, too.

I wondered if I would even be allowed to enter.

A workman told me I could go in.

Pews were askew.  A large portion of rug was ripped up.  Things were sticking out of the bare floor.  It was such a mess.

I had time finding the tabernacle.

I thought it might have been moved to a small side chapel that I had once been to daily mass in, so I went to find the door to that chapel.

There was no lit sanctuary lamp there and the noise and chaos of the church construction seemed to be increasing.  So, I went to leave church by a different door than I came in -- one that had no extension cord trailing through it.

As I made my way to the door, a prayer card caught my eye.  I stopped to look at it more closely and saw that the solitary card held a prayer for mourning.

I smiled in thanksgiving as I picked the card up, walked back to the main part of the church and prayed the text written on it, finding some solace in the prayerful solitude, even if no quiet was to be had with the hammering machines outside.

Shortly thereafter, I spotted a candle burning behind the main altar of the church.  Moving towards it, I noted a beautiful mosaic above a small tabernacle.

Then, later, when I went to exit the church, I noticed that the sanctuary lamp was burning directly across from the door that I had initially entered the church from.  If I had just looked along a straight path instead of being distracted by the chaos of the pews and rug ripped up, I would have been able to see direct to Jesus waiting to calm me.  Hmmm...