Last year, some of my live-and-in-person-friends, as well as some folks I "know" online opted to choose a single word to focus on for an entire year -- a word that summed up what they felt God calling them towards.  One that inspired who they wanted to be, how they wanted to live or where they felt growth needed to happen.  One single word that would guide their actions, reactions and even, at times, their (purposeful) inaction over the course of 2013.

This year, I thought I would do the same.

As a lover of words, a perpetual goal-setter, and someone who likes to think and reflect, I thought the exercise of actually choosing a word would be easy.  In fact, I was certain that with a bit of thought and some quiet time at Adoration, a word might choose me.  Indeed, I smiled, confident that THE single word would enter my mind, and, in a quick and striking moment of epiphany, I would know, "Yes! THAT is what 2014 is meant to be all about for me."

The fact is that as I sat at Adoration on two different recent occasions praying, a number of words came to mind.

Then, more tumbled through my consciousness as I went about my daily life.

And, as the New Year drew closer, still more words raised their hands saying, "Pick me. Pick me!"

Soon enough, there was an entire cacophony of possibilities.  Yet, not a single one consistently spoke louder than the rest.

And so it was that I almost opted out of the entire One Word exercise for 2014.

Yes, I almost decided not to listen to the still, small voice inside that had initially prompted me to reflect and pray about what I was to do in the new year, for the din of the possibilities was simply crowding it out.

But the whisper wanted to be heard.  And, it was.

I head myself thinking, What is it I am to do in the New Year?

Okay, it was not a whisper anymore.  It was a bit of an in-my-head, shout:

DO!  Duh... The profusion of words that have danced about your brain and heart for weeks are all nouns! 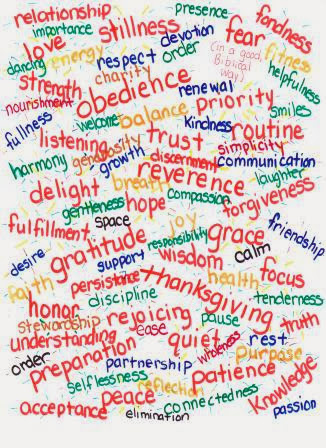 The fact is, you are just not a noun sort of girl.

Well, sometimes I am.  But not when it comes to goal setting or guidance.  In both of those cases, I am a verb-person.  I like action, something concrete I can do.  Something I can try.  Something that may bring me closer to where  -- or who -- I am called to be.

So it was I began to listen to the now not-so-small voice inside of me that directed my word for 2014 was to be a verb.

A verb that could encapsulate many of the nouns on the busy collage of words that had popped into my mind and played tug-of-war my with heart over the past few weeks.  One that would help me grow as God's child.  As a unique individual.  As a wife.  As a mom.  Even as a homemaker and as a partial provider for our family.  A word that, ironically, the Spirit been trying to reach me with the entire time I had prayed at Adoration and in all the time since.

When I finally heard the word, I laughed.

LISTEN is the word.

Stop thinking.  Cease searching.  Pause praying.  Just listen.  To your children.  To your husband.  To your heart.  To. Your. God.

Share and be inspired with others at the Word for 2014 Round-Up. You can also link up and share more folks' words at Plain Grace.

at 6:00 AM
Email ThisBlogThis!Share to TwitterShare to FacebookShare to Pinterest
Labels: Reflections

best wishes for a wonderful 2014 while you listen

Listen is a great word. I enjoyed your post. :)

I love this idea. I've been a Catholic for 12 years and never really connected to the Church in any meaningful way and I started wondering why. The thought that just popped into my head was " I don't really trust...". And that's my word for the year-Trust

Thank you so much for linking up at Plain Grace. I really like your word and the story of how it came to be your guide for 2014.