The Feast of St. Andrew, the Apostle is coming up, so it's time to get your St. Andrew Novena prayer aids ready. 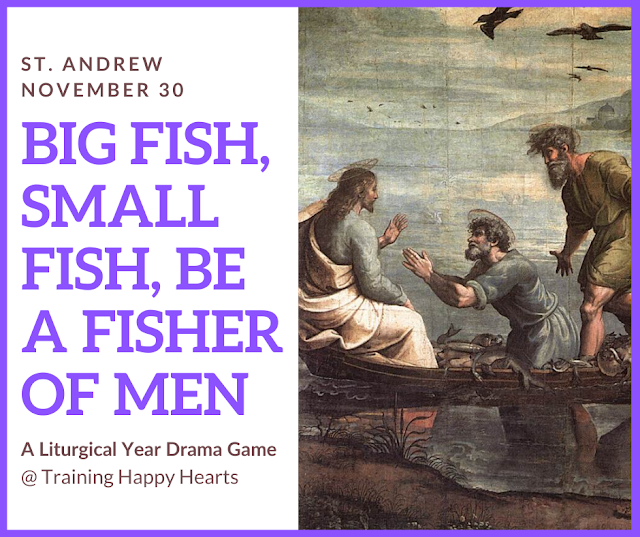 It can also be time to connect with your kids by playing another drama game that can tie into Liturgical Year. Today let me share with you a twist on the competitive improv game.

How to Play Big Fish, Small Fish, Be Fishers of Men

The game Big, Fish, Small Fish, Be Fishers of Men requires no props or preparation. You simply need a group of people in a circle.

2. Tell everyone you are going to teach three cues needed for the game.  For the first, hold your hands very close together with palms facing each other as if you are going to clap and say, "big fish". Ask everyone to repeat your action. Then, turn to the right and pass the phrase and action to the next person who will do the same to the next, until the phrase comes back to you. (Note how your words and action do not match. That is part of the fun of the game. The game requires you to wake your brain up because of the incongruency between saying"big fish" but having your hands close together as if demonstrating the size of a small fish.)

3. For the second cue hold your hands, palms in as if you are going to clap, about chest width apart, and say, "small fish". Have everyone repeat your action. Then, turn to your left and pass the phrase and action along until it circles back to you.

4. For the third cue, act as if you are throwing a net across the circle towards someone and say, "Be a fisher of men." Ask everyone to reply, "Amen." To practice this cue, have the person who you "threw" the net to throw it to someone else saying, "Be a fisher of men," and having everyone else respond, "Amen".

5. Explain that to play, you will pass the "big fish" phrase and action to the right, and the next player has three choices: (1) keep on passing to the right, (2) turn to the left to pass the "small fish" phrase and action, or (3) toss play to someone on the other side of the circle by looking straight at them and throwing a net while saying "Be a fisher of men." If the player chooses to keep passing right, play continues as such until someone says the opposite fish to change the direction of play or until someone casts the net across the circle.

6. At any point, if someone delays too long before passing a cue, gives the wrong action with a phrase, or passes to the wrong direction, that person is out.


To get a visual of the straight up Big Fish, Small Fish drama game that this simple liturgical year adaptation comes from, take a look at this video.


Then, just remember, that, instead of casting play with the word, "tadpole", in the St. Andrew feast day version, you cast with "be a fisher of men" and everyone responds "Amen". (You may wish to explain that the word we use to end prayers - Amen - means "so be it" and that the word is derived from foreign words that mean to agree with, affirm, emphasize, or approve of what has been said. Thus, in our game, we are thinking about how Jesus called on St. Andrew to be a fisher of men, and how He calls us to follow him and work to save soul, and we are affirming that call.)

What Concepts and Skills Does This Liturgical Year  Drama Game Reinforce?


Because your hands and your words don't match up when you play Big Fish, Small Fish, Be a Fisher of Men, the game makes a fantastic wake-up-the-brain game.

Some skills this game develops are:

Of course, it also ties in with the whole concept of St. Andrew being a fisherman that God called to be a fisher of men, which, in turn, lends itself nicely to further discussion and study about how we might become fishers of men.

If you'd like food for thought before chatting with children about being fishers of men, look here:

Hail and blessed be the hour and moment inn which the Son of God was born of the most pure Virgin Mary at midnight, in Bethlehem, in the piercing cold. In that hour vouchsafe, I beseech Thee, O my God, to hear my prayer and grant my desires,[here mention your request] through the merits of Our Savior Jesus Christ and of His blessed Mother. Amen.


If you would like other ideas for the Feast of St. Andrew, Apostle feast day, click on through:

We humbly implore your majesty, O Lord, that, just as the blessed Apostle Andrew was for your Church a preacher and pastor, so he may be for us a constant intercessor before you. Through our Lord Jesus Christ, your Son, who lives and reigns with you in the unity of the Holy Spirit, one God, for ever and ever.
~Prayer Source: Prayer of the Collect

St. Andrew, Pray for us.