Begin a Children's Adoration Hour (More than Once if Need Be!) 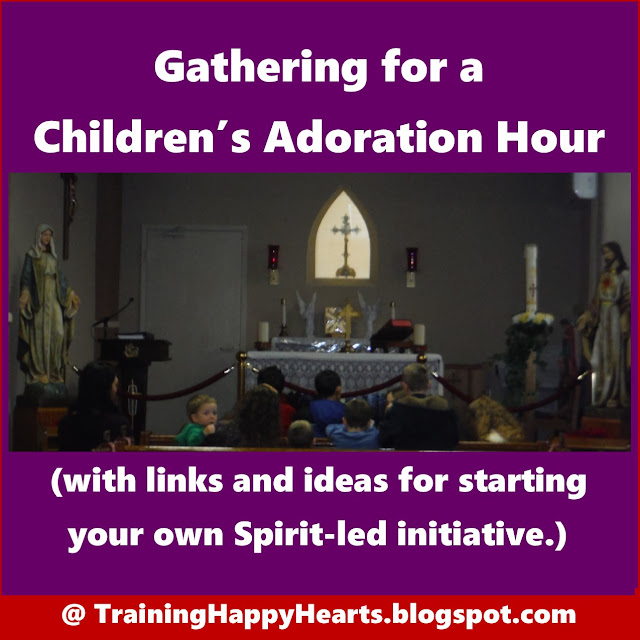 Several years ago, a Catholic homeschool group I was in approached a local priest about leading a monthly series of formal Holy Hours for children.  He kindly agreed and the initiative kicked off.

Although I am a "cradle Catholic", I was new to such experiences and was grateful to the organizing mom and agreeable priest for introducing my children and I to children's Adoration.  Unfortunately, though, the introduction was short-lived.

You Never Know if You Don't Try...
If I recall correctly, the format used for the first Holy Hours my children and I experienced was that of the World Apostolate of Fatima.  This format offered a beautiful, formal, and traditional Holy Hour approach, which worked best for families with older (or more sedate!) children.

During the Holy Hours, the presiding priest stayed on the altar, leading the service and offering a thoughtful homily.  The children sat in pews with their families, ideally, listening, praying, adoring, and taking turns leading decades of the rosary.  In reality, though, some children (like mine!) tried to escape the pews, got super wiggly, and, at times, even needed to be taken to the back of the church.

Luckily for we moms with "busy children", the mom who organized the Holy Hours also invited everyone to enjoy a snack, a meaningful, hands-on activity and some fellowship after the prayer time each month.  It was the snack and the engaging additional activities that helped me keep my children coming back each month.  For, in all honesty, at my children's young ages and with their wiggly ways, they just did not get much out of the Holy Hour portion of the monthly initiative.

I dare say, the same was true for some other children, because, unfortunately, attendance at the monthly Holy Hours began to dwindle, and, before too many months passed, the initiative ceased.

Although managing my children at the Holy Hours was often a challenge, I was sad to see the program peter out.  I had hoped that in experiencing it on a regular basis, and in witnessing the example of older children, my children would come to love Adoration. 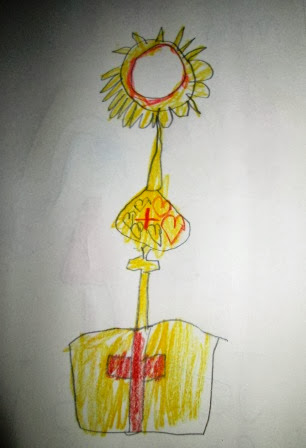 With no group option for children's adoration, I began making time for my husband or me to take our children to adoration on our own.  Our efforts to do so were not always met with welcome by our children, but, eventually, were met with a genuine plea of, "I want to go to Adoration."

Unfortunately, due to changes in work schedules, my husband and I allowed something not-so-great to happen:  new work hours did not match well with Adoration chapel hours in the next town over, so, as much as I hate to admit it, we stopped prioritizing getting ourselves to adoration regularly.

Granted, we did get to the chapel occasionally, and I was able to participate in occasional Holy Hours at our parish, but as our own weekly commitments to Adoration weakened, so did our children's experience of frequent, fruitful quiet time with Jesus.

About a year and a half ago, after a new local Catholic homeschooling group began, another mom and I began chatting about our desire for a regular group adoration hour.  I told her about a website I had found, Children of Hope, and she agreed that the format it described seemed like an appropriate one for our children, formal, yet interactive and with opportunities for children to move, also something we could lead on our own, or that could be led by a priest if we were blessed enough to find one who could offer our group his time.

Thus, my friend and I began praying over beginning a children's adoration hour and, sensing it was meant to happen, began making inquiries.  I reached out to some priests I know, but their churches did not have regular Exposition of the Blessed Sacrament and their schedules were unable to accommodate exposing the Holy Eucharist for our group.  My friend reached out to some she knows and got permission for us to bring a group of children to an existing adoration time.  However, she was told that it must be a completely silent adoration.  We did not feel our children were ready for that.

So, another mom got permission for our group to gather for a private hour of Adoration, where we could speak some and guide the children, at a church near her.  Unfortunately, the hour was quite an early one and the location a bit far for many in our group.

With so many roadblocks, my friend and began to wonder if our idea of a group children's adoration hour was really "meant" to happen.  Unsure, we stopped pursuing it actively and just left it to prayer and the Spirit's work.

Well, the Spirit did work!  About a month ago, a priest that my friend had contacted some time back got in touch with her, told her a new Adoration chapel had been built at his parish, and that he would welcome our group.

Wow!  We were thrilled!

My friend immediately got word out and a surprisingly amount of families from our group signed up for the first children's hour.  Then... snow!  Inches and inches of snow. A blizzard buried our plans.

Doubt crept in, but did not last. We decided to have my friend ask the priest if we could simply reschedule for another day this month.  He said, "of course."  She got word out, and four families ended up joining in for our group's first children's Adoration hour.

The wonderful parish priest met us in the chapel and led our group in praying the Sorrowful Mysteries of the Rosary.  Before praying each decade, he led the children in a discussion which engaged all but the youngest of our children.  (And, as moms of crawling children tried to corral their wee ones, the priest simply smiled and said, "Let them be."  It was so beautiful witness the mix of formal prayer, yet the encouragement of free movement for those young children that truly needed it!)

Then, when the priest had to leave us to attend to parish business, we invited all the children to move from pews to the space in front of the altar.  There, we began a modified version of the sample format for children's adoration as described at Children of Hope.  My favorite parts of that experience was witnessing the children earnestly praying in silence for a few moments, as well as hearing them share prayer intentions with one another.  Children praying, in silence and aloud, while visiting Jesus is simply precious.

After our Adoration time concluded, we moved to a meeting room to enjoy some liturgical year activities. 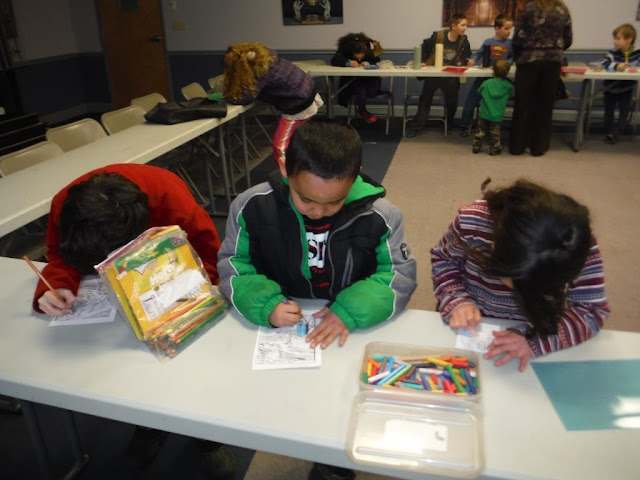 Because our initial meet up day fell close to Candlemas, two of our activities were making candles and prayer cards based on the Presentation of Jesus. 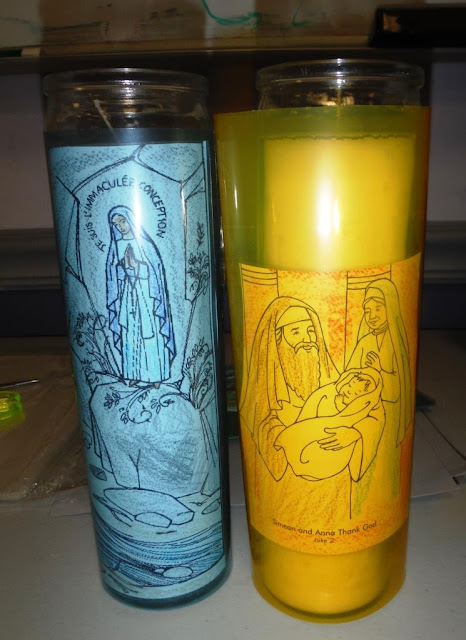 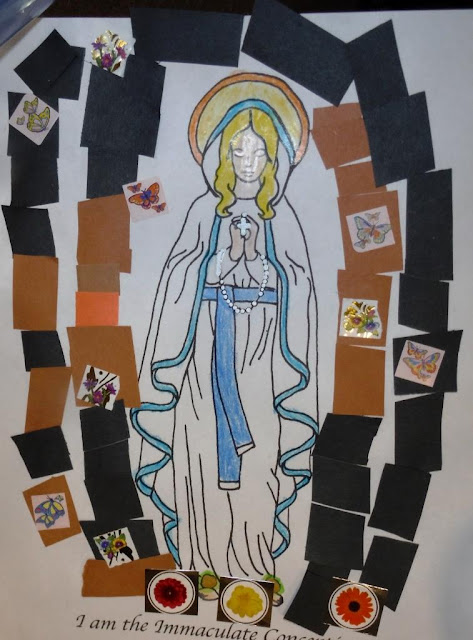 The children were also given an opportunity to revisit a game we played at our last All Saints day party and to bless themselves with Holy Water from Lourdes. 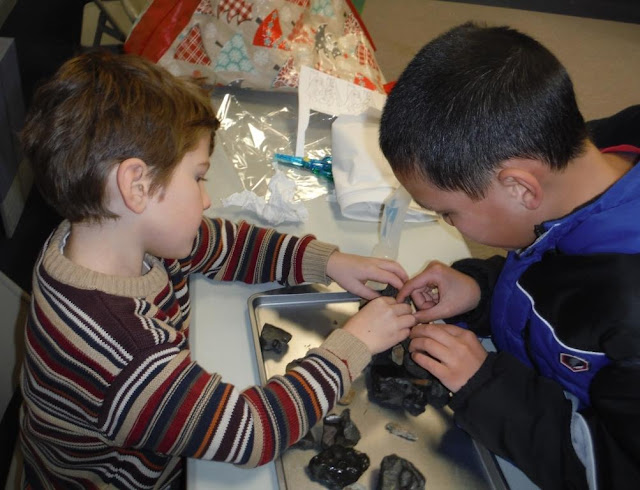 As our meeting time concluded, the priest was able to come back to see us and kindly blessed our candles. 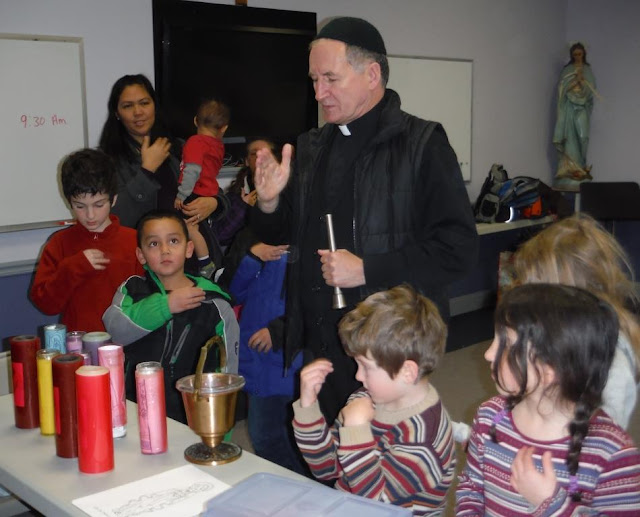 Then, we concluded with a group prayer.

Start Your Own Children's Adoration HourWhat a wonderful experience our recent children's adoration hour and liturgical year celebration was!  I look forward to meeting again next month and encourage others to start similar initiatives.

You can find many resources for children's adoration hours at:


I am sure there are more sites and sources out there for children's adoration, too.  If you know of a great one, please do share about in a comment.