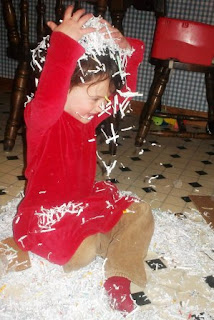 When Luke woke up on his birthday a few weeks back, he looked out the window and said, "It's not my birthday. It's not snowing." Yep, our boy "loves the coldness", really wanted snow for his birthday and was quite disappointed that none had come down to welcome him into his fifth year. And, Nina? Well she loves anything that provides tactile fun, so even though she wished for snow, too, she made do with the shredded paper snow that came in Luke's mailed gift from Papa and Nana on Luke's birthday while awaiting the arrival of the real thing!

Well, patience is a hard concept to develop in a preschooler, but Mother Nature, ruled by God, helps us learn to wait -- and to delight when what we have been waiting for finally arrives. 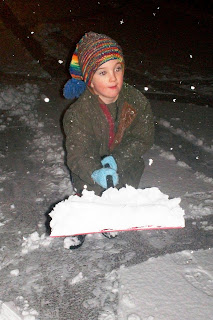 So it was that this past Sunday night, in sheer delight, that the kids opened the door shortly before bedtime to see snow - coming down and piling up! Luke was so excited, he raced to get his outerwear and new snow boots on, begging to go outside. A bit of heavy work before a late bedtime? Why not? He was all muscle and smiles as he "helped" Daddy shovel.

Nina, on the other hand, clambered out the door with smiles, but crawled back in but a few moments later with shivers-- tired and crying from the cold. Jack? He just blinked a few flakes off himself with a smile. 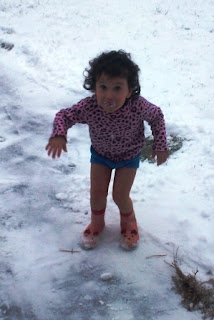 Well, Nina must have slept off her snow-reluctance. For, oh dear, a week ago Monday morning, as I was finishing up changing Jack's morning diaper, I heard the front screen door open and shut.  Much to my horror (and, okay, amusement, too, for why else would I have grabbed the camera just as I went to corral her inside to put on more sensible gear!?) our little girl had raced from the potty to don her boots and run outside, laughing and stomping in the snow on the front walkway.  Oh, our silly, excited-by-the-snow girl!  She balked when I dragged her in to get on warmer clothes, but cheered when big brother awoke and we were all able to go out to play. 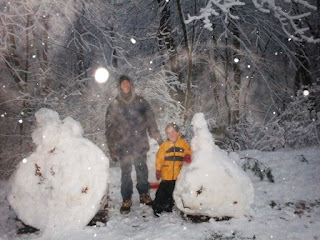 Since then? Luke, who rarely dresses himself without help has been making great strides in independence when motivated to go outside in the snow. And, we have been enjoying the seasonal joys of making painted snow angels, going on wolf walks, catching snowflakes on our tongues, eating snow, sledding, marveling at snow-laden branches, shoveling and, of course, building a snow people, dogs, cats and reindeer - some complete with bird feed.  Day after day, snow fall after snow fall, we have been enjoying this white Christmas season. 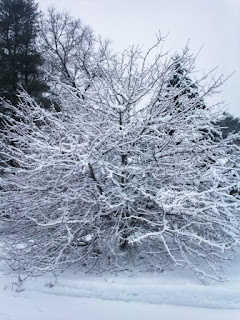 As I reflect on it, I cannot help but to repeat the words Luke said during his bedtime prayers the other night: “I thank God for snow!" Its arrival this year has been very timely for us, allowing us delight in a white Christmas season.

We pray, despite occasional blizzard-like conditions, high winds and icy roads, others in white-Christmas areas have been feeling blessed as well.

This post is being shared at Grace Alone's Thankful Thursday.

at 5:15 AM
Email ThisBlogThis!Share to TwitterShare to FacebookShare to Pinterest
Labels: Outdoors, Play, Seasons

Loving the snow! I almost feel cold seeing your daughter in the snow with out being bundled up. :) Children are so much fun!


Blessings in the New Year!

Precious children. Precious memories! Now that is something to be thankful for :)

Love that first photo... :) You gotta love kids. And I love the photos of the snow. Happy New Year!