Pajaggle: A Review of A Game of Fun and Learning for All Ages

Recently, I was delighted to be asked by Help! S-O-S for Parents to be part of a team to review Pajaggle, a new game for ages 3 up. To access all reviews, please visit  Pajaggle: A Blogger Review.  To hear about how much our family enjoyed the game, simply read on:

Praise for Pajaggle from a Unique Child, His Mama of Many Hats and His Specialists

How do you know when my son with special needs likes a game?  One way is to observe him choosing it over something else he loves.  Such was the case with Pajaggle this week.
A Story of Pajaggle Appeal
My children love to be outdoors and active.  So, the other day, when my eldest son Luke stopped raking leaves and jumping into them with his siblings and me in order to go inside, I thought he was just taking a potty break.  After five or ten minutes when he had yet to rejoin our leaf pile fun, I got concerned and went inside to check on him.  What I found made me smile.
My son was sitting at the table engrossed in a solo game of Pajaggle.
Pajaggle  had come into our home the day prior.  While my youngest son was napping, I introduced it to Luke and his sister, who both proclaimed it "quite a challenge" and "lots of fun".  They played the game cooperatively together for quite some time, fitting the gears of the game into the correct holes and punching them back out with the "pajiggler" stick.
Later the same day, while I entertained the baby, Luke eagerly introduced the game to his father, who noted Luke's concentration and enthusiasm while playing it.
The following morning, Luke wanted to play Pajaggle again, but I told him that since the game had many relatively small pieces, he'd have to wait to play until his baby brother was napping.  He couldn’t wait.  When Luke noted his brother occupied outside, he snuck inside play the game.  That says something:  Not much draws Luke away from time outdoors, but Pajaggle did.  It's a keeper!
A Mama of Many Hats Tips Them to Pajaggle
It’s pretty obvious that my son likes Pajaggle.  But how about me?
I like it, too!  Even though the game has been in my house only about a week, I am already brimming with thoughts about its obvious appeal.  Here are the first ten that come to mind:
Specialists Echo Praise
Since Pajaggle has been in-play multiple times in our house over the past week since we received a game set for review, both my son's Behavior Monitor and his Behavior Modification Specialist have had a chance to become familiar with it.
The Behavior Monitor was immediately impressed with the game, saying that she is always looking for quality games that can help children with a variety of developmental and behavioral profiles with multiple skills.
The Behavior Modification specialist, in turn, laughed, amazed at how the game was as challenging for her as it was for my son as she played it with him – and just as fun, too.
Both specialists agreed that Pajaggle is "great", affording opportunities for problem-solving, sensory input, fine motor skills, self-soothing, etc.

Value over Cost
So far, I have nothing but praises to sing about Pajaggle.  Well, except for one detail that is of utmost concern to parents of special needs children:  its price.
While my family is lucky enough to have acquired Pajaggle at no cost in return for our honest review, other families will have to pay about $30 for it.  This price seems just steep enough that some families who are already burdened by the extra-costs involved with raising a child with special needs, might not be able to purchase a game set right away.  Budgeting may be in order.
I do feel that budgeting for Pajaggle  is a fair thing to consider, however, if it seems like a game your child might like.  When you consider all the ways that Pajaggle can be played, the age and stage-range that it can appeal to and the fact that it includes opportunities for fun, learning and therapeutic input, the game’s “museum-price” does not outrageous.  Pajaggle is worth looking into.
Interested in Getting Your Own Pajaggle Set?
You can purchase one directly through  the Pajaggle site.

Or you can find it at Marbles: The Brain Store, a fabulous in-person or online store that I just found and am absolutely loving, where you get free Shipping with any purchase over $100 at Marbles.  Or receive an exclusive online discount by using the code: 4XHO93B2 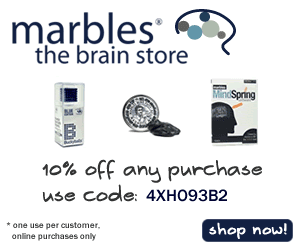 Plus, of course, you can buy a vintage or new set at Amazon.

Thank you, again, to Help! S-O-S for Parents and Pajaggle for inviting us to participate on the review team.  We loved it!

Great post! Thank you. I have shared this on all my networks (LinkedIn, FB, Twitter, G+ etc)

Thanks! Glad you liked it.