Has It Already Been a Year Since We Welcomed Our Newest Student?

It was but a year ago today that we welcomed our newest student into our home(school).  And, what a delight our surprise little one has turned out to be so far! 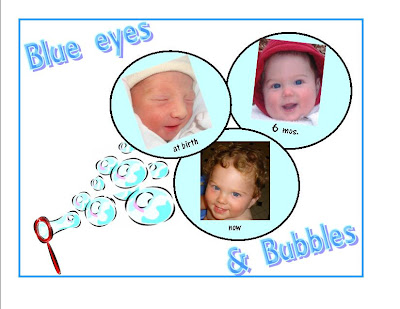 Jack continues to shine with a sense of calm and joy as he did at seven months old and he has been absolutely eating up the attention I have been consciously offering him since my reflection that our last should sometimes be first.  He was so proud of himself yesterday morning as he mastered his new FAO Schwarz Teddy Bear Stacker yesterday morning when he and I had "our time" before his siblings got up.

Of course, Jack also adores Luke and Nina's attention.  In fact, I had to smile last night during his tubby time when his siblings asked if they could help wash his hair and back.  Without any trouble at all, Jack pulled himslef up on his chubby legs to stand, holding onto the edge, to get closer to his brother and sister.  As his healthy, happy face rounded in open-mouth delight, I thought back to what a skinny, little peanut Jack was when Luke bathed him for the first time.  Where does the time go?

Over the past two months, time seems to have flown.  we have had so many concerns, appointments, activities and "urgent" things happen that I almost feel like I missed how Jack went from being a ten month old, who was just learning to pull to standing to being a one-year-old who he has advanced manifold in both confidence and personality in what seems like a blink of an eye.

In the past few days, Jack has begun to show himself as a bit of the "climber" at times, a problem solver at other times and a delight at all times.  Truly, when he is not content with a "straight mouth" faced (as Luke has termed Jack's pensive, observant look), Jack bubbles with beautiful smiles.  Indeed, his delight in the world can be contagious.

Oh, that we may all see the world through an eager, healthy, happy, curious and peaceful one-year-old's eyes.

We so love our blue-eyed bubbly boy and celebrate the blessing of our first year with him today. 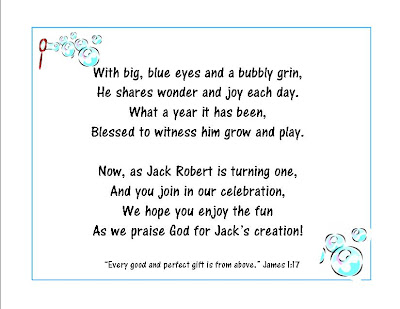 (So, okay, we know not everyone could come to our house for some fun, but we still hope you'll join us in thanking God for Jack and all the babies God blesses our world with!)
Has It Already Been a Year Since We Welcomed Our Newest Student?
2011-06-30T05:49:00-04:00
Martianne
Jack|Reflections|
Comments

at 5:49 AM
Email ThisBlogThis!Share to TwitterShare to FacebookShare to Pinterest
Labels: Jack, Reflections

Media and Our Boy's Mind 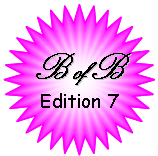 I have been on a blogging break for a few weeks now in order to dedicate time to other areas of my life which demand it.  A large portion of my re-directed time has been geared toward getting through a challenging period with Luke.
Without detailing all that has been happening, let me summarize by saying that the change of seasons seems to have triggered sensory overload in Luke, and his impulsive behaviors have been on the rise.  Whether these two things are connected, I have yet to figure out.  One thing I am aware of, though, is how a seemingly innocuous Magic School Bus video became the impetus for one of my most frightening parenting moments to date.
Thus, when Danette, of S-O-S Research, wrote to say the topic of Best of the Best, Edition 7 would be media as it relates to kids with special needs, I decided to find a few moments to share our story about the power of television – even when limited – and about how a “good” video became the catalyst for a “bad” choice.
Weaning Ourselves from Television
Before Mike and I bought our home, we decided that a common living room fixture would absent in ours – a television.  For, while we both felt that TV has a place as a source of entertainment and information, we also agreed that it can deter things we value more, such as conversation, relaxing with a good book, etc.  So, we parked our TV in a less central location and began life as a family without the constant drone of television emanating from the main room of our home.
That said, having our TV in another room didn’t keep us from watching a few too many daily hours of it.  Indeed, “Law and Order”, HGTV, sports and other programs often became a background for paperwork and folding clothes, as well as a central focus for wind-down time.
It was only when we began having children that Mike and I realized just how much television we were still watching and, of that, how much was inappropriate for young ears and eyes.  Yep, “SVU” and many commercials during sports had to go as far as we were concerned.  And, shortly thereafter, for reasons more financial than anything else, our satellite went as well.  Television access dwindled to whatever came in with our modern day “rabbit ears”.  DVD’s became a more common source of screen time.
Enjoying Videos and Network TV in Small Doses
Since babyhood, then, our children have been exposed to only limited screen time.  Yes, we have a TV.  And, yes, they watch it.  But, only to view parent-approved shows, such as:
-          Daddy’s favorite sporting events
-          an occasional PBS program
-          an even more occasional parent-approved entertainment video (think “Land Before Time

” or “The Impossible Elephant