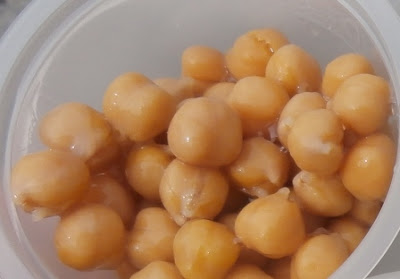 Canned chick peas have become a staple food in our home.  I know they are not the healthiest of food options. (No canned food is).  However, they are a convenient, on-the-go, GFCF food that packs at least some nutritional punch into our picnic times.  So we tend to eat a lot of them during the summer.

Unfortunately, I just discovered that the chick peas the kids and I have been consuming copious amounts of during the past several weeks may be doing us harm.

Our Slipper Slope: “The Blue Can” Chick Peas

Some months ago, I spied a well-known brand of chick peas on deep sale at the grocery store.  When I glanced quickly at the ingredients there were only four: chick peas, water, salt and one thing I did not recognize.  Thinking about the fact that the chickpeas cost less than half of what our usual organic brand did, I decided that ingredient won’t kill us with a few servings.  I’ll just look it up when I get home to see what it is before feeding the chick peas to the kids.

Can you note the beginning of our slip?  I placed budget over common sense guidelines for health.  (Never purchase anything with multiple ingredients unless you can read each ingredient's name and you know what it is.)  Further, I was disillusioned about what I could and would do. (Did I really think that my three young children would be calm enough after a grocery store trip for me to quickly put away groceries and, then, look up an ingredient online before I forgot to do so altogether?)

The slip got worse.

On a subsequent grocery store trip, when I went to replenish our canned chick pea stock with our usual organic brand, the children stopped me.  “Buy the ones in the blue can”, they begged.  “We like them better.”

Questioning What Disodium EDTA Is and How It Affects Us

Fast forward a number of weeks.  (Or has it been months?)  We have been mindlessly pulling the tops of chick pea cans at least a couple times a week and popping the beans into our mouth with smiles, knowing we like the beans and thinking are "good for us."

Then, this week, as I pulled to top off another can at lunch picnic the other day, I noticed the ingredients again.  Disodium EDTA.  What is that? I wondered.

This morning, I Googling for an answer.

On Fat Guy Slimming, a random site that I bumped into, I read that “Calcium Disodium EDTA...is a nasty little chemical made from formaldehyde, sodium cayanide, and Ethylenediamine.”  Ewww.

But is Calcium Disodium EDTA different than plain Disodium EDTA?  I did not find much on this, but I did read on one site that “disodium EDTA is a sequestering agent (that) does bad things to blood calcium levels.”  Considering calcium levels already border on low around here due in part to the fact that we are casein-free, that fact made me cringe.
As I read on another site, that Disodium EDTA robs your body of “Vitamin C, magnesium, iron, calcium, zinc, potassium,” I cringed even further.  Pangs of guilt for allowing such a vitamin and mineral thief entry into our home overcame me.

I was then placated for a minute when I discovered that some feel disodium EDTA has benefits, since it combines with metals and pulls them out of our systems – such as when it is used in chelation therapy.  Chelation therapy is not something we have ever tried here, but I have considered it, especially since I have heard if can have positive effects for children “on the spectrum”.  So maybe this disodium EDTA stuff isn’t that bad, I hoped.

I wanted to cling to that hope, but, honestly, in the end, I came to agree with the person whose thoughts I read here that disodium EDTA “clings to minerals in your digestive tract and pulls them out, leaving them to be disposed through your feces” and “just as in relationships, clinginess is a bad thing for healthy people because when you eat foods with the preservative, it pulls out both bad and crucial minerals and disturbs gut bacteria.”  I think I have the guts in our home fairly healthy and I don’t want to be messing with them by subjecting them to undo clinginess through our diets several days a week.  The disodium EDTA has to go.

Back on Top of Healthy Choices

So here I am with my kids at the bottom of a slippery slope.  And, here I go to brush the yuck aside and climb back to the top for making healthy dietary choices for my family.

To that end, today, I have decided :

Do you have further information on Disodium EDTA?  Do you have a favorite “healthy” canned bean brand?  Do you have an easy way you prepare, cook and store beans from scratch for later on-the-go eating?  Please share!

The girl who painted trees said...

Preparing beans is very easy if you have a crockpot. It does require some thinking ahead though, which I don't seem to be good at, so I do keep canned beans, but I will make sure to check for Disodium EDTA. I always wondered about it, but never took the time to look it up. Anyway, soak the beans overnight in water with a splash of apple cider vinegar (it helps breakdown the beans a bit to make them easier to digest), then in the morning, rinse them well, put in your crockpot on high and they will be ready for lunch.

Thank you. That does sound easy. I think I might do it backwards though -- soak during the day, crock over night, then pack them up to go out for lunch. DO check your bean cans. I was horrified by what was listed on my mother's cans of beans when I mentioned it to her. Even more than was on the "blue cans" we had.

Thank you for sharing your findings, Martianne! I have a can of chick peas with that ingredient in my pantry. At the grocery yesterday, I saw it in canned kidney beans too, and (unbelievably) in saline sprays for children! We have to be ever vigilant about food additives these days.

I have had success freezing beans before, although I'm not sure if they would be picnic ready from the freezer.

Oh my goodness, we have been consuming the "blue can" chickpeas for months as well. Thank you for the warning! We will not be buying them again!!