I received this complimentary product through the Homeschool Review Crew. 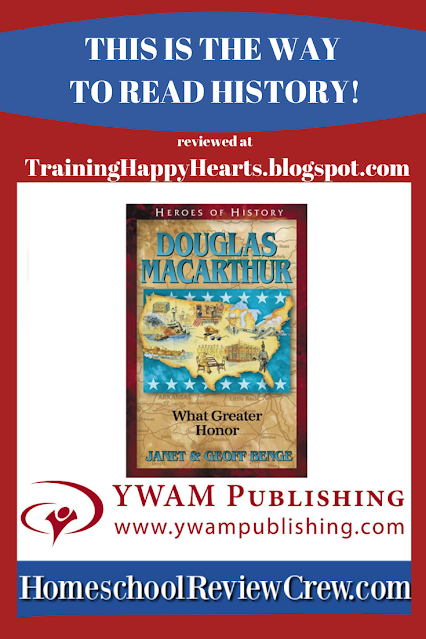 If you are looking for fabulous biographies perfect for individual reading, family reading, unit studies, and more, YWAM Publishing is a name to remember.

Through the years, our family has been blessed to review a number of titles in their Heroes of History series and have thoroughly enjoyed each one. 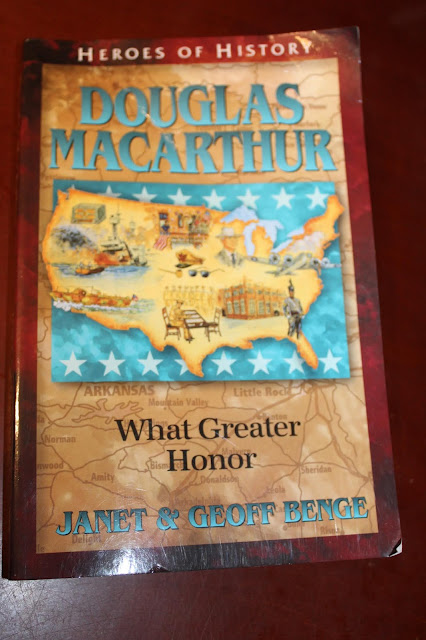 The latest - Heroes of History, Douglas MacArthur: What Greater Honor by Janet and Geoff Benge (which can be paired with a downloadable curriculum guide) followed suit with being as engaging and well-written as the other books in this series we have read. In fact, for one of my children, it trumped all the other titles!

Seriously, this is what my 10-year-old dictated to me when I asked him for his thoughts for this review:

I thought this book was amazing in every single way, and we should get more of these stories.

You may be wondering why I liked it so much.

For example, I like the way the beginning of the story started later in Douglas' life as he and his family were evacuating the Philippines and, then, the story flashbacked to MacArthur's childhood and told the rest of his story.

Overall, the story ignited my imagination as I pictured MacArthur fighting bandits in Mexico, driving off Japanese enemies in the South Pacific, and standing up for the Philippines, post-war Japan, and Korea.

The story was a motivating and inspirational story that you - yes, you!- should read it.

I have read other books in the YWAM series and liked them, but this one is my favorite so far, because it was about a courageous man during war times.

He truly loved the book and would often stretch our read together times by asking for more of the book.

As you can imagine, he was quite disappointed when the book ended.

In recent history, my eldest child, 15, has rarely joined us for read aloud time without complaint. However, the Douglas MacArthur book eased his contention.

When I asked him for his words for this review, he said:

We decided to read MacArthur as a family read aloud. Lately, I have not liked read alouds and have tried to avoid them, but this story drew me in.

Before reading the book, I knew a bit about General Douglas MacArthur from a video game and thought he sounded cool. When we read the book, I realized he had an interesting life and was an amazing person.

Some things that stood out to me about him were:

I would recommend this book for any American. Even though Douglas MacArthur died in 1964, some of what he experienced and fought for affects us today, in particular, things related to China and Korea.

My daughter, 13, also noted how apropos the MacArthur book seems to current issues with China, Korea, Communism, and Socialism.

Douglas MacArthur was a veteran in World War II and the Korean War, therefore, I had never been that interested in him, because topics I tend to avoid are the French Revolution and the World Wars. (Both tend to be extraordinarily gruesome.)

Still, when my mother introduced us to the YWAM book, Douglas MacArthur, I found out it was quite intriguing.

I probably would not have agreed to listen to the book if I had not liked the other books in the YWAM series, such as Milton Hershey, Benjamin Franklin, etc. Because I found those books engaging even if the people and places in them had not seemed interesting to me before, I did not immediately disregard the Douglas MacArthur one.

I did not regret my decision to listen to Douglas MacArthur. As the book told it, his life was not as boring and gruesome as I expected to be. In fact, it was quite intriguing.

One thing that stood out to me were that the president that told Douglas MacArthur not to go ahead and crush North Korea caused many issues and conflicts that could have been avoided in later history. (This was not actually explained in the book, but my common sense when looking at the history in the book and current events filled in the gaps.)

I would completely recommend this book to anyone who wants to learn about an outstanding man who fought for freedom and treated others with dignity and respect.

So, as you can see, the book was a hit here and made a rather profound impact on my children.

I admittedly was wowed by some of the details and connections the book brought to light, too, and even found myself sharing about it at several recent homeschooling events.

This book is definitely one we all recommend! Oo, and if you are a homeschooler that likes to turn books into studies or a teacher in a co-op or classroom, great news! There is a downloadable Unite Study Curriculum Guide available to go with the book, too.

Because we were so getting into just reading the Douglas MacArthur book together here, I did not pause to go over the Key Quotes, Chapter Questions, Maps, Extension Ideas, and more that are contained in the comprehensive unit study, but I did look them all over, and I have some quotes printed out that I intend to use for either copywork, dictation, or impromptu speech exercises as well as some essay prompts to challenge my older child with. 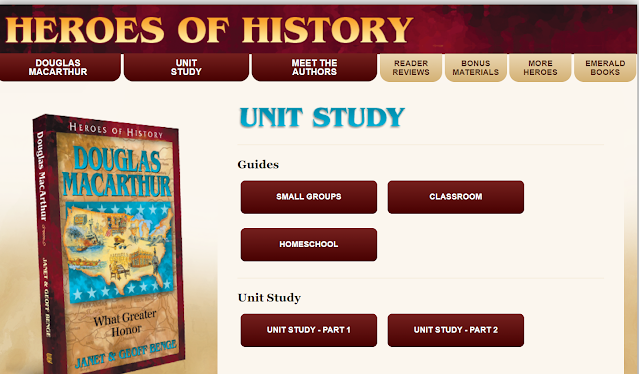 Surely, if I were still teaching at co-ops, I could easily run a full course with the book and all the materials and suggestions within the unit study. It's fabulous stuff!

If you'd like to learn more about how others are using this book title and its corresponding unit study materials - or if you'd like to read about some of the other studies, do click on through to the Homeschool Crew Review to find links for 40+ Crew reviews for YWAM titles.

You might also want to connect with YWAM Publishing: