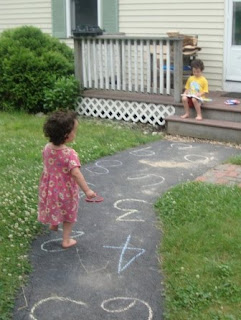 Yesterday, I posted thoughts and reflections on how to best organize and utilize the Outdoor Environment with inspiration from the Creative Curriculum

.  As I mentioned in it, we spend a lot of time outdoors here at Jammies School.  But, recently, with Third-Trimester-Pregnant Mama-Teach, whose ligaments are giving her trouble sometimes, our activities must be limited.  Mama cannot run, jump and play alongside the kiddos of late.  So, what to do?

Break out the chalk and clackers of course for some spontaneous -- and SPD friendly -- Mathematics fun.

Here's what we did:

At a good ligament moment, I wrote large chalk numbers -- two of each -- on the front walkway.  Then, I sat down on the step (ahhhh!) and challenged the kids to run and jump on whatever number I called out.  (Number recognition, of course, and with the SPD Lenses on - proprioception with all that running and jumping!)  Since Luke recognizes his numbers better than Nina, I asked him to help her find them when she could not do so on her own. (Teamwork and character/habits of kindness and help building here!) I also gave them both color and shape clues as necessary.  (It's a curvy one written in pink.  It's the one that looks like part of a triangle. Etc.)  Later, the kids took turns calling numbers out for each other, using, upon Luke's suggestion, a hand-me-down numbers book they just received as a guide. 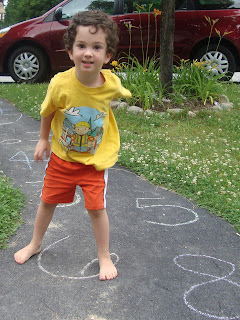 Then, later in the afternoon, we took our clackers outside for a rhythm extension (music, number recognition, counting and auditory input, too!)  This time, when I called the numbers outs, the kids not only had to find them, but had to try to clack their clackers as many times as the numbers they were standing on indicated.  We also did the reverse.  I clacked a certain number of times while they listened and then they tried to find the corresponding number. 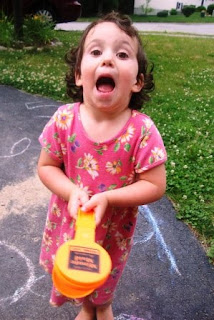 All the clacking was just too much fun for Luke and Nina!  For, while I was relieved to sit on the stoop, they were getting more and more excited.  So, we forwent the numbers and had clacking,-running Rabbit-and-the-Hare races (a recent favorite story of the kids) across the front lawn. (No shoes because we know our lawn is "safe" and it provides better tactile stimulation!) 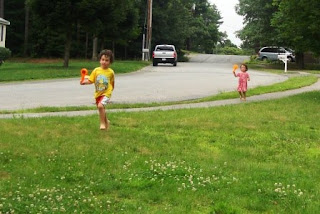 So, in the end:  All fun.  All spur-of-the-moment.  All learning and SPD-friendly, too! ... While Mama gets to sit and the kids burn energy.  Hoorah!

I am now following your blog
What great ideas in this post !!