Solid Catechism through Lego? Yes! {A Catechism of the Seven Sacraments Review and Giveaway}

I am delighted to be sharing a review and giveaway of Catechism of the Seven Sacraments, a gem of a catechism tool with a fresh new approach. 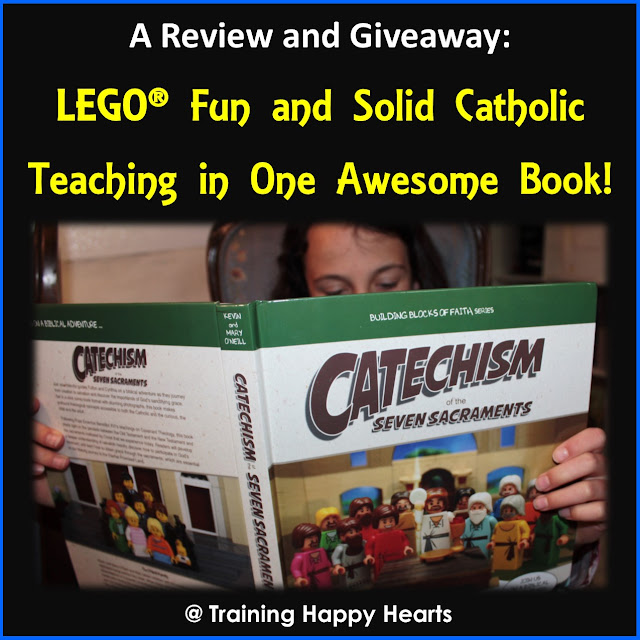 When I heard that Kevin and Mary O-Neill had created a catechism book using LEGO® scenes which they had built with their children, I thought, Brilliant!  My children love LEGO® and can always use another tool for learning about our faith. 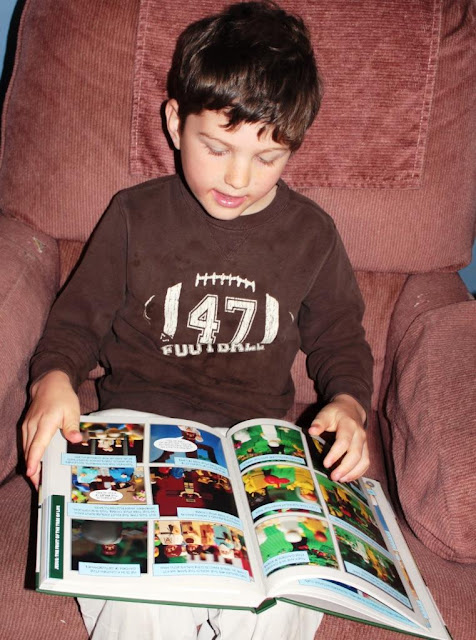 Then, when I was blessed with a copy of Catechism of the Seven Sacraments for review and realized just how solid the presentation of our faith is in it, I thought, Awesome!  This book is even better than I imagined.

I was 100% impressed with how Catechism of the Seven Sacraments presents solid Catholic teaching in a format that invites readers of many ages to enjoy and learn together.
Bright, detailed, LEGO® scene illustrations draw readers into the almost 300-page comic-book style story and then well-thought comic-book style text clearly teaches about the Sacraments instituted by Christ, parallels between the Old Testament and New Testament, and more.

In fact, as I read Catechism of the Seven Sacraments, I was happily surprised to find that the book includes more than just the usual basics about Baptism, Reconciliation, Eucharist, Confirmation, Marriage, Holy Order, and Anointing of the Sick.  It also touches upon:

I appreciate how seamlessly Catechism of the Seven Sacraments weaves together bits about Saints, prayer, morality and more as it tells the story of Salvation History in the context of two children - Fulton and Cynthia - talking about the Sacraments.  The O'Neill family truly did a fantastic job making tenets and traditions of our faith understandable. 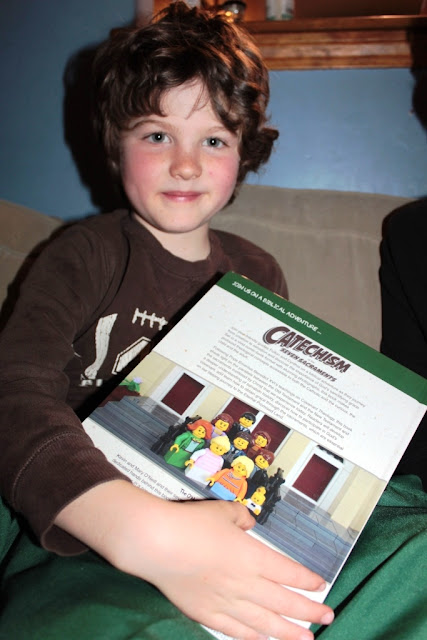 Undoubtedly, the content of Catechism of the Seven Sacraments is much meatier than I expected to find in a graphic novel style book.

The book begins with the New and Everlasting Covenant - the Holy Eucharist, which is the source and summit of our Catholic faith, and, then, continues on through each sacrament, which stem from and point to the Holy Eucharist. 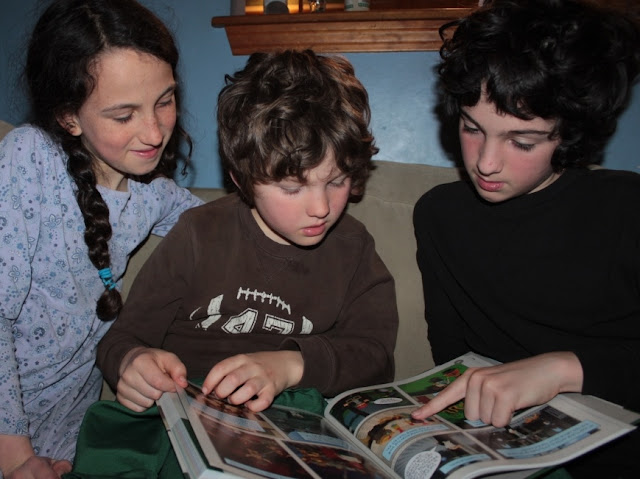 It follows Pope Emeritus Benedict XVI's teaching on Theology of Covenant and makes use of typology, a favorite tool of the Venerable Archbishop Fulton J. Sheen in which elements of the Old Testament are shown to prefigure those of the New Testament.

Happily, it does all this using memorable building brick illustrations which make understanding how the Old Testament is fulfilled in the New and the New testament revealed in the Old easy.

Further, the Catechism of the Seven Sacraments offers a detailed table of contents, color-coded sections on each Sacrament, and a helpful glossary, all of which make it even more use-friendly.  Plus, there are multiple Scripture and Catechism references sprinkled throughout page margins, so anyone who wants to dig even deeper in the Bible and the Catechism of the Catholic Church can easily do so.

Truly, I cannot say enough about how inspired the O'Neill's were in designing Catechism of the Seven Sacraments!  The books truly is a gem among catechism books - so inviting in its presentation, so deep in its content, so delightful for children and adults to use to learn alongside one another!

Watch a video about the book!


Children Enjoy the Catechism of the Seven Sacraments! 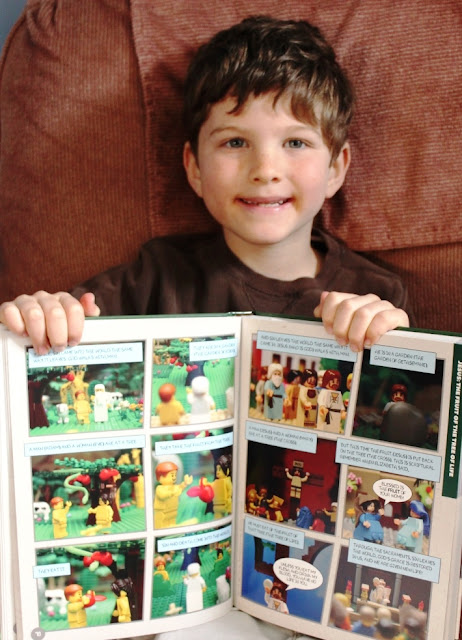 
"I got Catechism of the Seven Sacraments from my brother for my First Holy Communion*.  He gave it to me early, and we started reading it that night.  I enjoyed it. 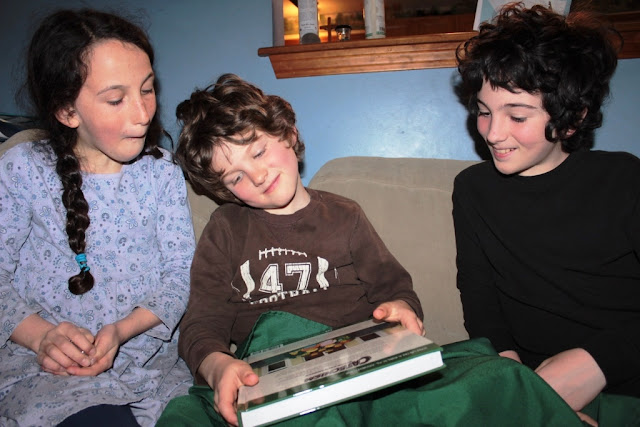 It is Lego!  It is also catechism.  It makes catechism fun. Since then, we've been reading more of it.

The story has a girl who doesn't know anything about faith and a boy that knows everything.  He teaches her by telling her stories about Jesus, and about the Old and the New Testaments and how the Old Testament pre-represents the new one.

I would recommend it to people who like Lego and people who want to learn catechism.

I am glad I have it!

This is my favorite picture so far, because Jesus dying on the cross.  He died for us so all our sins would be gone.  Then, He rose again to fulfill what He said.  Now, He is in Heaven, in our hearts, and in the tabernacle in the Eucharist."


*I received the book for review, but, since my oldest loves using LEGO® with his siblings gave it to him to gift his little brother. 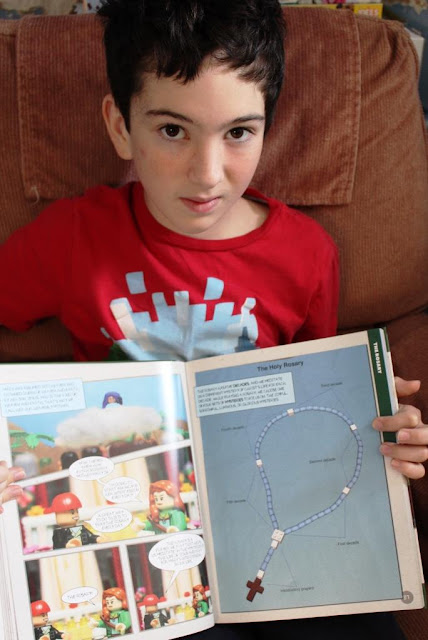 
"I gave my brother Catechism of the Seven Sacraments as an early First Holy Communion gift.  I thought it was a good gift because it is a catechism and uses building blocks to teach about the faith.


When we first opened it, I did not like that there are fake Legos in the pictures.  That drives me nuts, because I like real Legos only.  I also did not like the yellow and peach skin tones mixed up.** 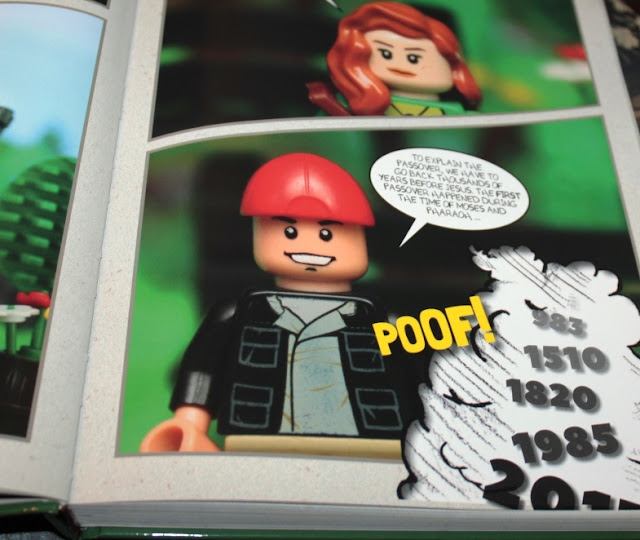 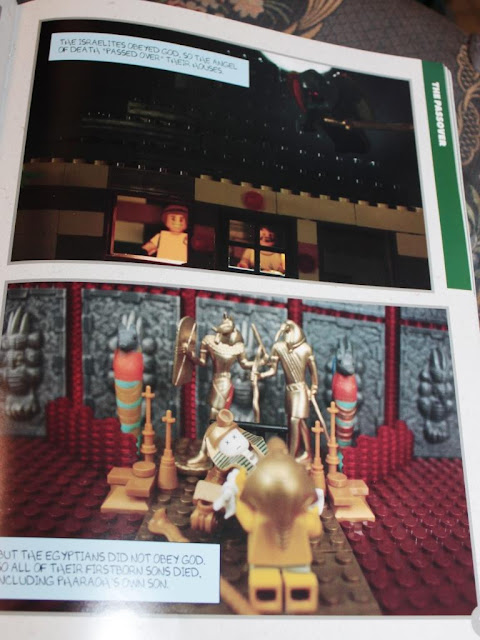 I would recommend this book to people who don't like JUST Legos and who want to learn about the faith.  It teaches the faith solidly."

**Yes, my oldest is a quirky LEGO® purist, so he picked out every brick in the illustrations he thinks is not "a real LEGO®" and did comment a number of times about how he does not like when different-colored flesh tones were used in images.  However, he also thought some of the ways in which real LEGO® were used were quite creative and cool and also appreciated the content of the story and how it teaches about the faith. 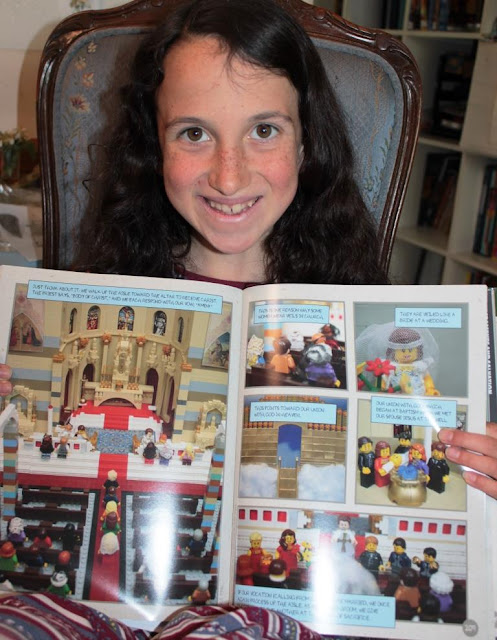 
"I really like Catechism of the Seven Sacraments.  Almost everything in it is done with Legos or building blocks - plus faith statues and other stuff. It is fun!


One of my favorite illustrations is the one of the church.  It has so such detail in it.  We also noticed some photos use Lego pants for water.  That's clever!


I also like how some of the story takes the Old Testament and pairs it with the New Testament.  It helps me see the importance of both and how they interconnect.


I also like how it's a conversation of a boy and a girl talking about the faith.  It teaches straight catechism, but does it in a fun way.  The boy explains faith using the Bible and catechism.

I think this book would be good for: 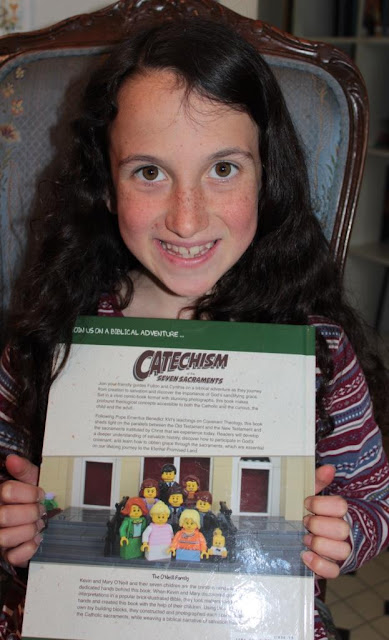 I am really glad we got this book! The author, his wife, and their seven kids must have taken a looooong time to make it.***"

***My daughter got a kick out of the "portrait" of the author' family on the back cover of the book. 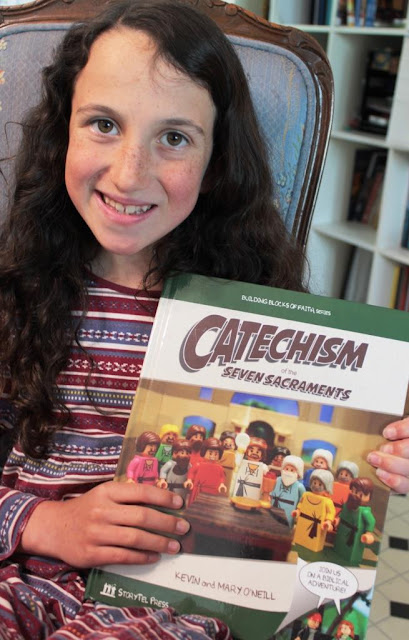 I agree with my daughter.  Catechism of the Seven Sacraments makes a fantastic read for Catholic families.  I would especially recommend it for:

Most certainly, the book is light in its appearance - with its fun LEGO® comic book style.  Yet, it is also quite lever and substantial in its content, with an imprimatur from the Archbishop of Omaha.  Doctrinally sound and delightfully fresh, Catechism of the Seven Sacraments is a wonderful expression of St. John Paul II's New Evangelization!

Learn more about the book at StoryTel Foundation.

StoryTel Foundation has generously offered to share a copy of Catechism of the Seven Sacrament with two lucky Training Happy Hearts readers from the continental Unites States.  Enter below your chance to receive one of these copies!

My kids love LEGO, and this book would really engage them and make learning about the faith so much fun. Thank you for the opportunity to enter to win one!

I think using Legos to explain the catechism will really engage kids who might be bored by more traditional versions! Thanks for the giveaway!

This is great! My boys love Legos!