This past week, some of the children and adults from our local Catholic homeschool group enjoyed learning about St. Ignatius through food and fun! 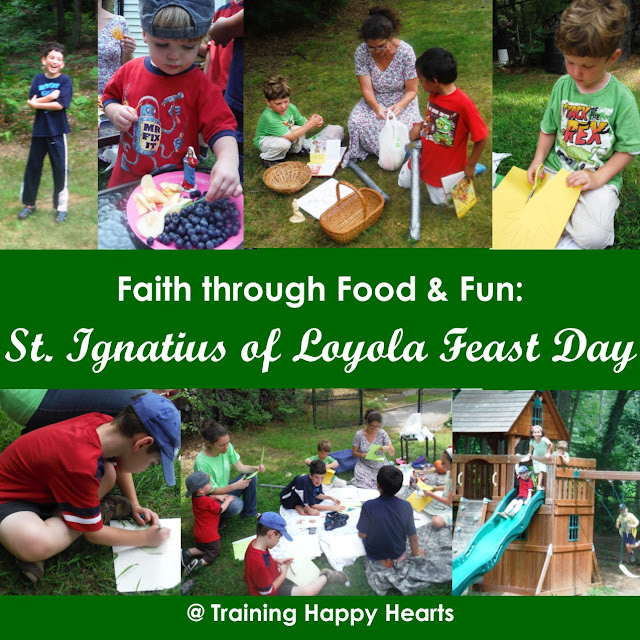 We gathered at a friend's home and, while the kids got re-acquainted with some free play, I set up in the shade of the back yard.

Once all was set up, we gathered on a blanket for opening greetings and prayers, which included the Sign of the Cross and two prayers from St. Ignatius' own words, the Suscipe or the Prayer of Generosity.  We learned, too, that our host family's close friend is a Jesuit priest, which was cool, and recalled that Pope Francis is also a Jesuit. 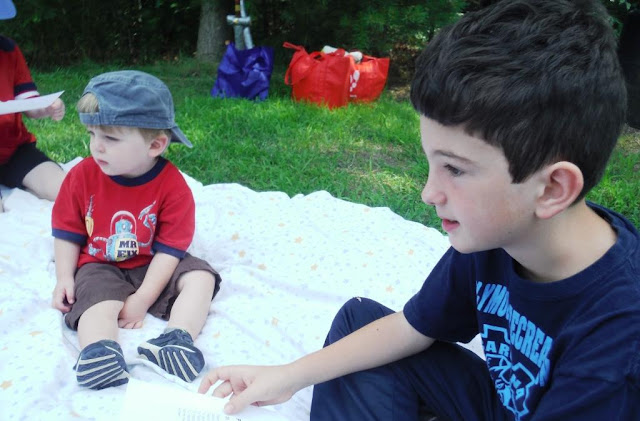 Then, we chatted about what a saint is, in general, and who St. Ignatius was, specifically.   I invited the children to share anything they knew about St. Ignatius, and, in doing so, we segued into the next part of our gathering: snacks and drink!

Faith (Geography and Etymology) Through Food

One of the children shared that St. Ignatius has been a soldier who laid down his sword in order to follow Christ.  That led us to the snacks (which the children were eagerly awaiting!)

We gathered around each snack, chatting about how each related to St. Ignatius. 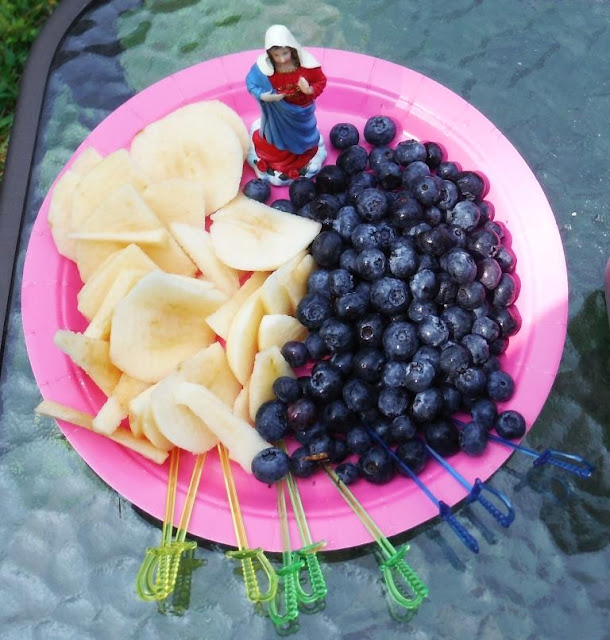 I told the children the story of how, after deciding to follow Christ, St. Iganatius saw a vision of the Virgin and Child Jesus.  Shortly thereafter, he laid down his sword at a shrine.  Blue (blueberries) is a color traditionally associated with Mary.  White (apple and pear slices) is often associated with purity.  Sword-shaped toothpicks remind us of the sword St. Ignatius laid down (and make for a fun way of eating that was a big hit!) 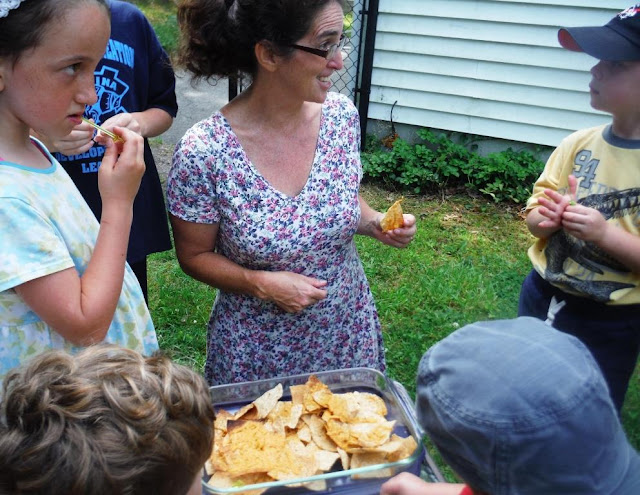 Next, we talked about nachos.  The chips the nachos were made from have three sides.  These reminded some of our children of the Father, the Son and the Holy Spirit.  It reminded other children of the Holy Family.  I let them know it reminded me of the traditional hat of the Jesuits, which was triangular in shape.  Further, I asked of the children associated any part of the world with nachos.  of course, they did -- Latin America.  We talked about how Jesuit missions began in Europe but have since spread all over the world.  We also talked about the etymology of the word "nacho", which I first heard about on Catholic Cuisine.  In short, "Nacho" was a nickname for a man named "Ignacio" (or Ignatius) who is said to have created nachos.  (Whether he was named after St. Ignatius of Loyola, though, is unknown.) 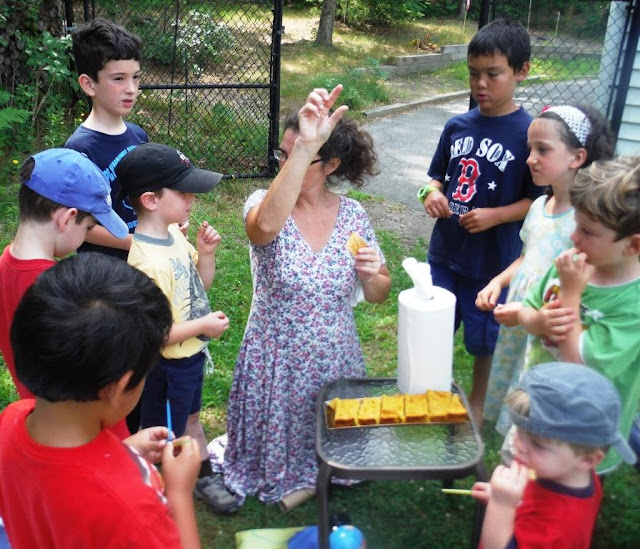 We then talked about the gluten-free, casein-free pumpkin-corn bread, which a friend had adapted from a recipe at Lemons & Anchovies.  This recipe is authentic to the Basque region, where St. Ignatius was from.

Likewise, we had cran-apple cider, which reminded us both of the region St. Ignatius was from, since there is a traditional Basque cider, and our own region, since cranberries are common here.  This connection, in turn, was to remind us that although St. Ignatius lived long ago in another part of the world, his impact affects us even today in our part of the world. 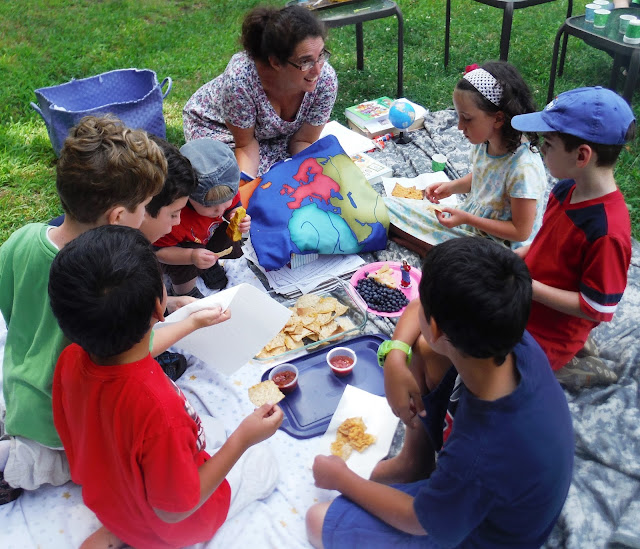 (Please note:  Some of the links which follow for your convenience are affiliate links to Amazon. for your convenience.  Should you click through them to make any purchase, we may receive small compensation.  We thank you for this and invite you to read our full disclosure.)

Once the children had served themselves snacks and cider, we gathered together to chat further.  Using small globe and  a cloth map of the world, we identified where St. Ignatius was from (the Basque region of Spain), where he traveled (the Holy Land), where he studied (France), and where he directed the Jesuits from (Rome).  I also read aloud to the children about St. Ignatius from the Loyola Kids Book of Saints, pausing the story there to add additional details and information that I'd gleaned from other sources. 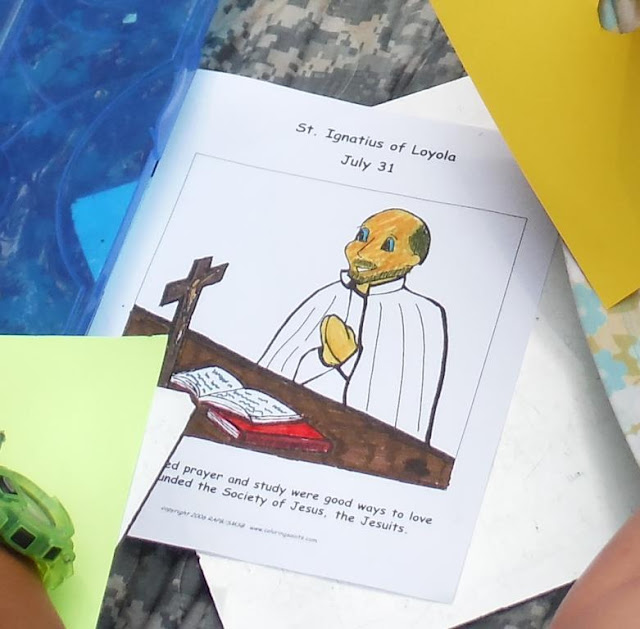 As the children finished up their snacks, some chose to color, using markers and color sticks on images of St. Ignatius printed out from Coloring Saints and Herald Entertainment.

Once our St. Ignatius story time was over, it was obvious the children needed "wiggles" time, so we gave the children a reason to run about the yard while practicing a child-friendly spiritual exercise.

We quickly chatted about how St. Ignatius had transformed from being a soldier who fought in battles to being a strong follower of Christ.  In doing so, I mentioned how both soldiers and followers of Christ can become stronger through disciplined training and how St. Ignatius developed Spiritual Exercises which are still used today in order to strengthen himself as a follower of Christ.  I asked the children if they'd like to learn some of these exercises, adapted to kids and, then got started on three activities that were inspired by Ignatian Spirituality for Kids. 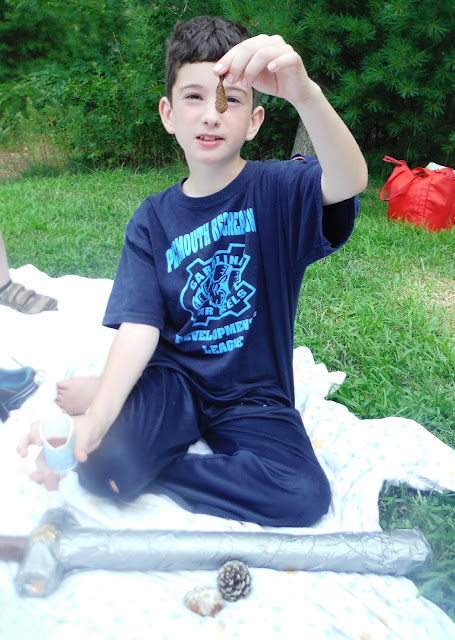 For the first exercise, we talked about how St. Ignatius made a practice of finding God in all things and how we can, too.  I challenged children to spend five minutes inspecting the entire yard and treeline on their own, in pairs, or in trios, to find small, interesting things that their peers might not also find., which they should bring back to our gathering blankets.  (For the sake of our friend's gardens, I added the stipulation that said things must not be broken off the stems of anything else.)

The children then eagerly ran about collecting interesting rocks, pine cones, leaves, blades of grass, etc., which they brought back to the blankets when I called "time" and shared about.  As they did, we noticed how unique and special each object was and what it might remind us of.  We also connected a duct tape sword that one child was holding back to God:  God made people and natural things in the world.  People took the natural things and made the materials which they then made the sword with.

We thanked God for His wonderful creations and emphasized how EVERYTHING really does go back to God!

Then, we transitioned to our second spiritual exercise:  imaginative prayer.  We talked about how St. Ignatius recommended that  people read through gospel passages, placing themselves in the scene, letting it play out, interacting with the characters, and noticing senses and feelings.  We then tested this type of prayer out by having the children get comfy and close their eyes while I did a dramatic reading of Jesus Calms the Storm from A Child's First Bible, complete with added sound effects. 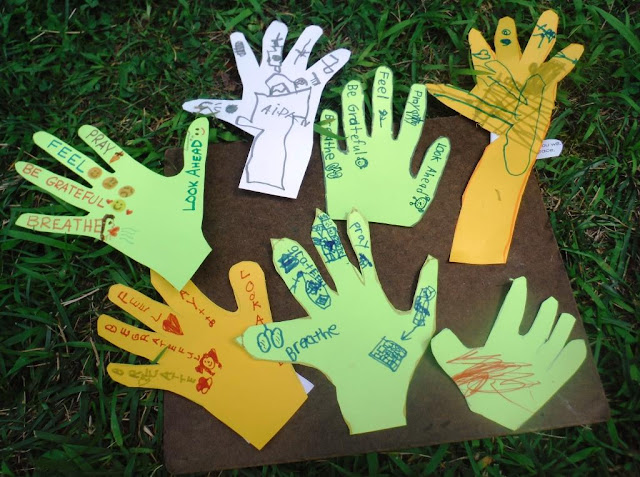 Finally, we transitioned to our third spiritual exercise: children's daily examens, which we learned about by making a  5-Finger Daily Examen craft.

As the children finished up their 5-Finger Daily Examen crafts, they went off to a swing set to play.  Then, we called them back to introduce them to choice activities that included Gospel Dramatizations to remind us of St. Ignatius' imaginative prayer, Visions of Mary (or drawing Mary and the Child Jesus in chalk), and a Life of St. Ignatius Obstacle Course. 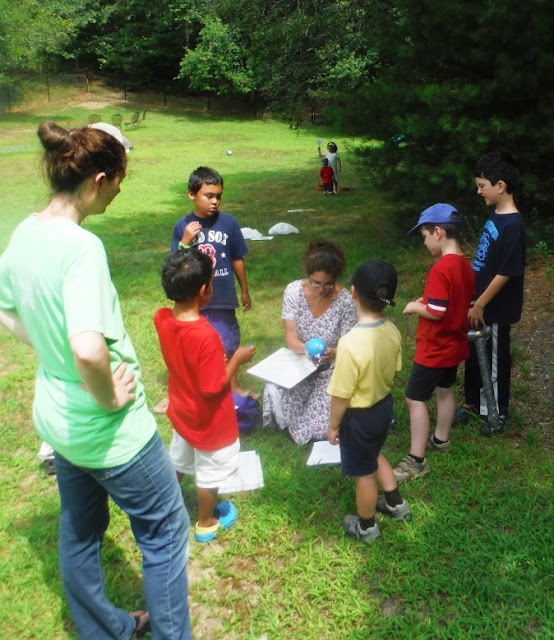 The children were most interested in the latter, so I proceeded to review key events in the life of St. Ignatius with the children as I drew quick sketches on white boards and had the kids help me set up whiteboards and props for an obstacle course.

As soon as the course was laid out, two children commenced racing through it, followed by more children and moms!  What fun we had. 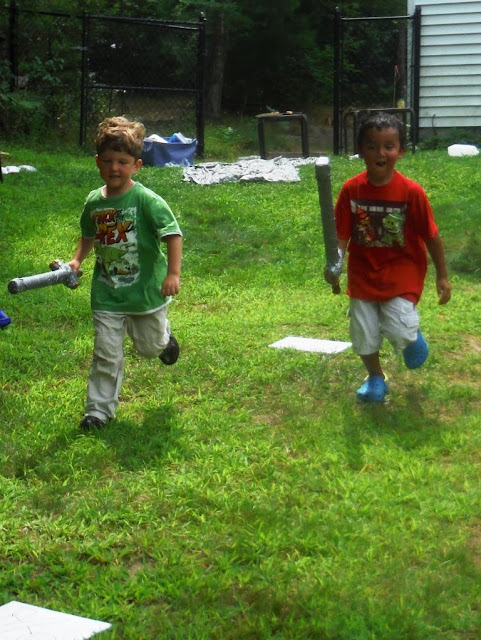 At Station One, like St. Ignatius, we were "born in a castle" and, later, picked up swords to charge forth as soldiers.
At Station Two, we "were shot" and had to drag our leg to the next station, still holding our swords. 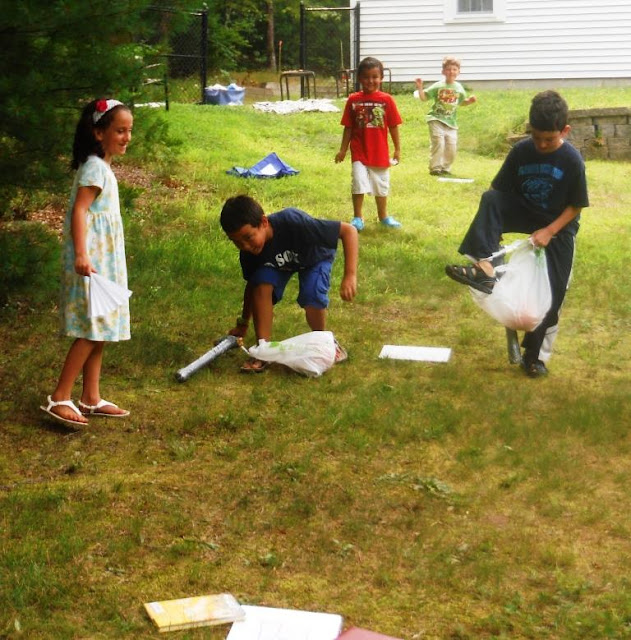 At Station Three, we tried to stretch our legs which had healed shorter than our other legs, by tying a "cannonball" to it.  As such, we went forth, sword still in hand. 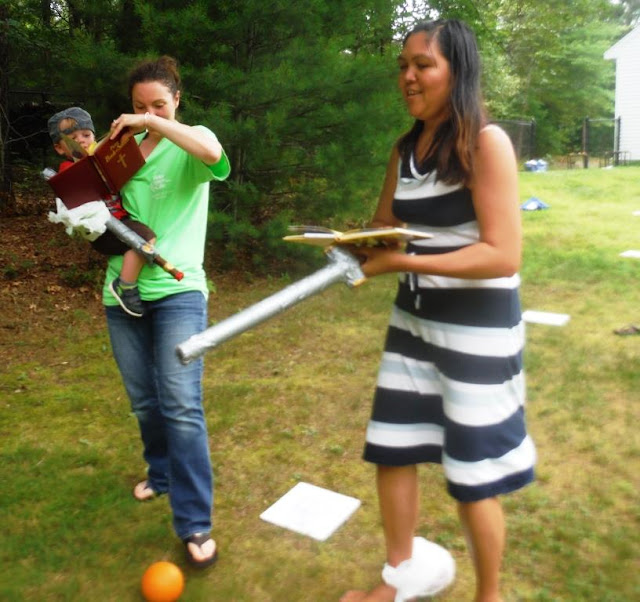 At Station Four, as we convalesced, we picked up stories of saints and Jesus to read.  Then, carrying a copy of the Picture Book of Saints, while dragging our "cannon balls" and still carrying our swords, we went forth. 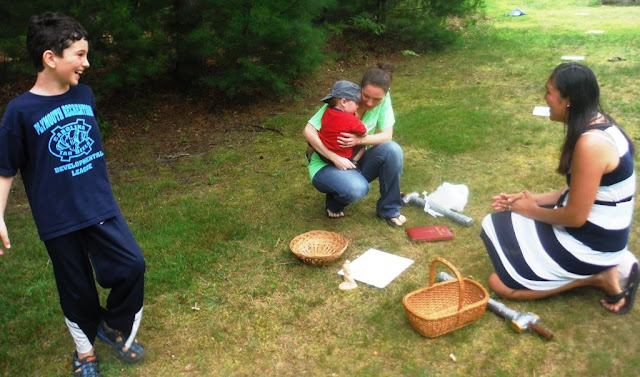 At Station Five, we finally we gave our lives to Christ, saw a vision of Mary, were healed and, then, went to a shrine before deciding to live in a cave for nearly a year to repent.  Thus, we laid down our swords, took off our canon balls, knelt by a small state of Mary to pray a Hail Mary before picking up a basket to carry forward calling out, "Alms for the poor!" 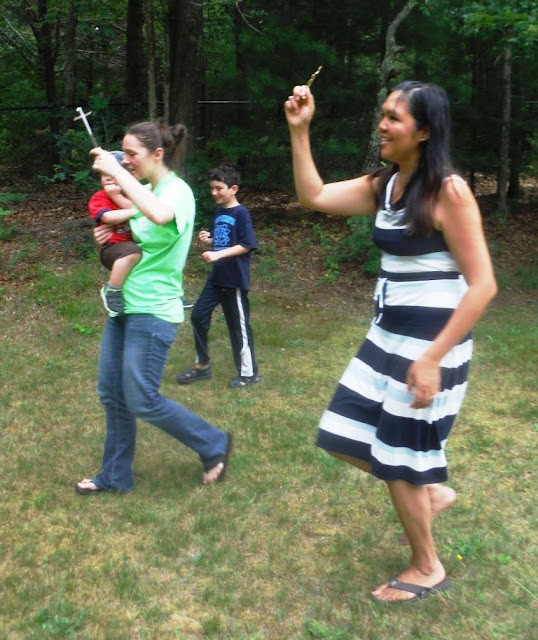 At Station Six, we went to the Holy Land to spread the Word, but did so with such enthusiasm, that we were asked to leave, for fellow Christians feared we would be kidnapped and sold for ransom or killed.  Moving forward with a cross or crucifix we enthusiastically called out, "Follow Jesus!" 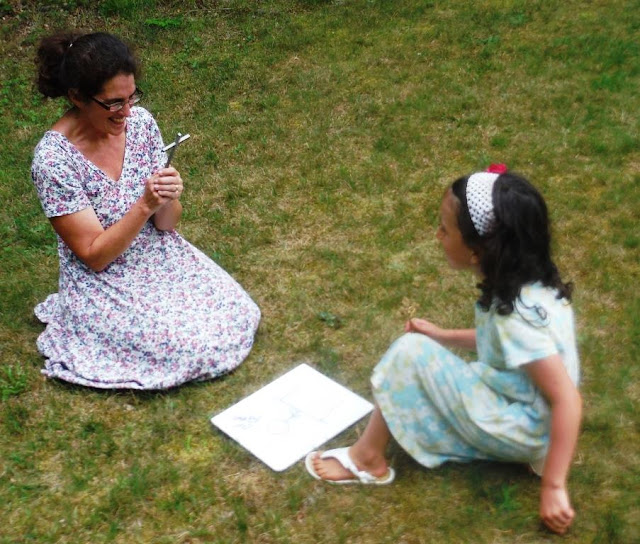 At Station Seven, we joined boys in a Latin class in Paris and continued our studies for ten years, meeting the men who would form the Company of Jesus, or Jesuits.  Here, we prayed an Our Father.


At Station Eight, we saw the Jesuit order go from ten men to over a thousand spreading out in missions to Europe, India and Brazil.  We spun either a small globe or a globe ball around. 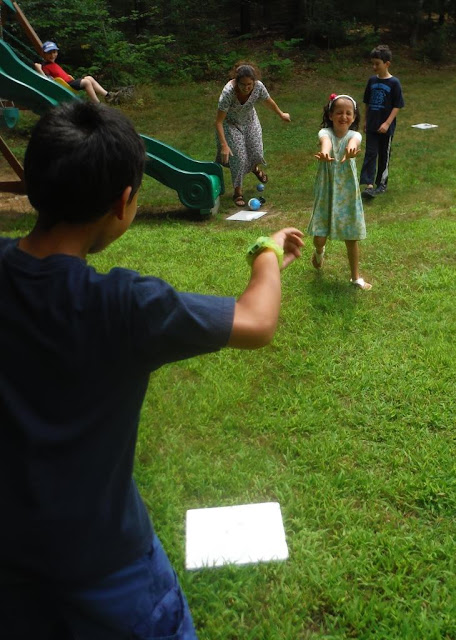 Then, after some years, sick and blind, we went to Station Nine, our death and onto Heaven. 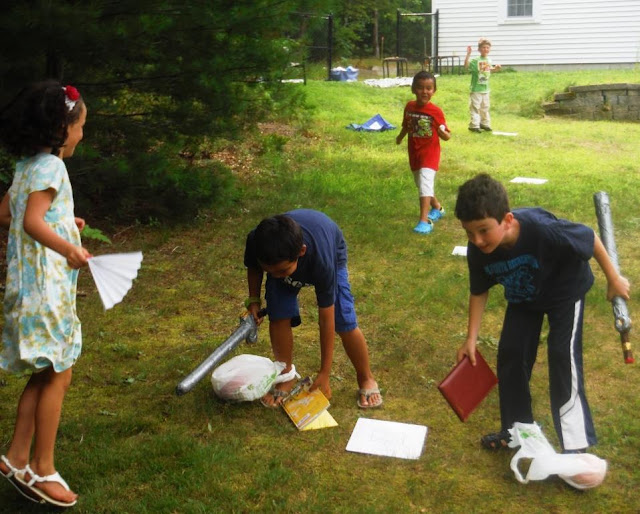 What fun these races were and how they helped us remember highlights of St. Ignatius' life.

Upon the conclusion of the races, we cleaned up and the kids cooled off with free play in an air-conditioned basement.  Since then, my own children have been using their 5-Finger Daily Examen and referring to St. Ignatius and the Jesuits daily.  I hope the other children were impacted by our celebration, too, just as I pray you and yours might be if you hold a similar event!

I'd love to hear about your favorite resources and ideas for sharing about St. Ignatius and the Jesuits with children.  I'd also be delighted with anything you'd like to share in the way of food and fun as related to saints for upcoming feast days.  May we continue to bless one another and the children in our lives with enjoyable, yet meaningful study and celebration of the saints!