Spotlight on Nina and Luke: Marmalade and Manners

as our family read aloud.  No sooner were we through the first chapter than were Luke and Nina asking about marmalade.  So, during "just Mommy and Nina" time the other day, we picked up some apricot marmalade for breakfast. 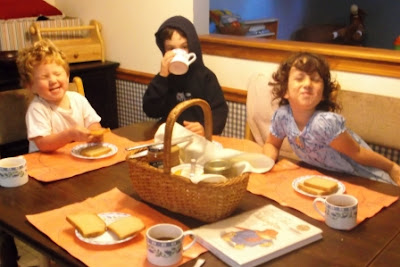 Thus it was that yesterday, at just a day shy of five years and four months old and at exactly six years and ten months old, Nina and Luke had their first taste of marmalade. 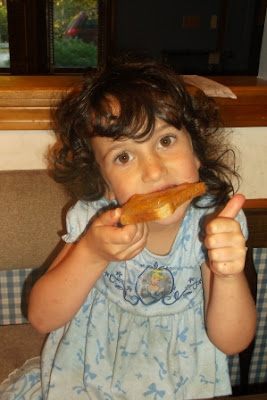 Nina chose hers straight up on toast. 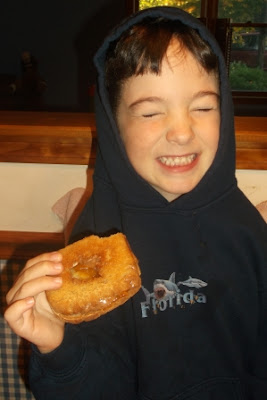 Luke surprised me by mixing almond butter and marmalade together to make a sandwich.  (He often does not like mixed foods.) 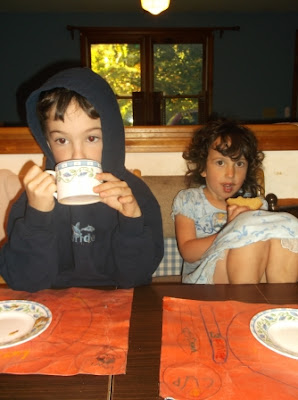 Both got so into their treat breakfast of chocolate almond milk, toast and marmalade that, while I was reading the next chapter of A Bear Called Paddington

, they forgot their table manners.

Luckily, a set of knock-knock jokes was all I needed to alert them to their errors.

Knock-Knock.
Whose there?
Noel.
Noel who?
No elbows on the table.

Knock-Knock.
Whose there?
Annie.
Annie who?
A knee (or two) is at the table and does not belong there.

We learned the first of these jokes from a homeschool friend of ours whose daughter politely used it during Christmastime to correct her grandmother's table manners.  The second is one we made up since our children put their knees up against the table all too often.

Since we have been enjoying these jokes for a while now, we usually only need to begin repeating one joke, the other, or both before body positions are corrected. 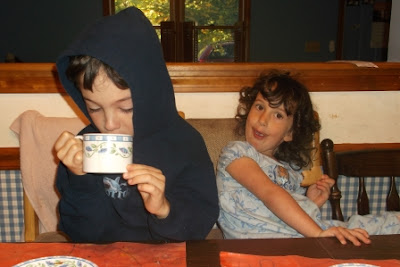 I realize that having a hood on at the table is not exactly mannerly.  However, we pick our focuses here with an understanding of sensory needs in mind.

Luke has always had a difficult time with behavior around the change of seasons.  As the weather has cooled over the past few days, I have noticed a series of mild, but apparent, sensory integration issues, impulsive actions and poor choices.  So, I have been trying to minimize additional catalysts for trouble.

Now that it is getting chillier out, Luke has been choosing to wear his hoody sweatshirt daily.  However, when the hood is down on it, it irritates him.  For although he is not as tactilely defensive as he used to be, he still has some tactile quirks.  And, like many SPD kids, some of these have to do with collars, tags, the sensation of air on skin, etc.  Thus, the hood.  For now, we are overlooking it.  Once we get through the seasonal change, we just may have to think of a new knock-knock joke! 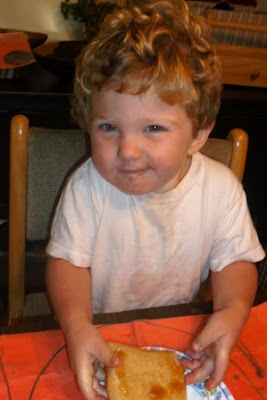 Please note: Links to Amazon within this post and others are affiliate ones. Should you choose to click through one to make an Amazon purchase, we may receive a small percentage of the sale. This does not cost you anything, but is a choice we thank you for making. Anything we make from links goes straight back into training up our children and to much of what we share with you here. Thank you!

at 5:22 AM
Email ThisBlogThis!Share to TwitterShare to FacebookShare to Pinterest
Labels: food, Jack, Luke, manners, Nina, SPD, Spotlight on Luke, Spotlight on Nina

I like the funny side you have found of teaching good manners at the table. It is another example of your positive attitude towards teaching, homeschooling and, in general, raising your children. And, fortunately, it is contagious...
Thanks

Thank you, Cris. I truly hope that my positive attitude is more contagious than my negative and/or critical on, b/c unfortunately, that side rears its ugly head at times, too. Luckily, not that often.