The other day, Luke and Nina told me that since it is November and Thanksgiving is coming, it is time to make a cornucopia on the kitchen wall again.  What were they referring to?  The "God on the Kitchen Wall" Thanksgiving Day Countdown Cornucopia that has become a little tradition for us.

In the past, we have had such fun cutting and counting to make one and enjoyed counting days and blessings as we did that we will definitely be doing it again this year -- albeit starting a week late!

Here's an excerpt from our Wonder and Will blog post about it in case you want to borrow the idea while we are busy making a new version of it! 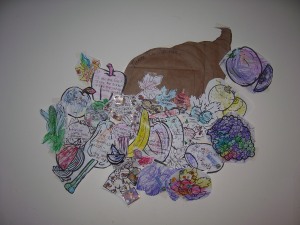 Most would agree that gratitude is vital habit of a happy person.   We certainly believe this is true!  And so began the first of our kitchen “bulletin boards” two Novembers ago when Luke began to show an increased interest in coloring everything in sight – including the kitchen walls!  Instead of letting frustration overcome me, I decided to shape his coloring interest into a lesson in gratitude.  Thus, I made a paper bag cornucopia and printed out a bunch of fruit and vegetables pictures from various sources online.  I then wrote, “We thank God for…” on the cornucopia, and each day, the kids colored a fruit or veggie picture to post on it.  On each piece, we wrote something that the kids, Mike or I was grateful for, or simply whatever word popped rolled off the kids’ tongues.  The art-in-progress that developed served almost like a Thanksgiving Advent calendar, and I was ever-grateful that coloring on the actual walls ceased (at least momentarily.  Nina later passed through the same stage. Praise God for Magic Erasers!)

Giving thanks on the wall works for us.  What works for you this Wednesday?

I was just thinking of how I needed to get a cornucopia set up, so we could start writing down what we are thankful for.

Thanks for getting me motivated!
Bethany