Living the Liturgical Year: Celebrating Our Lady of Altagracia 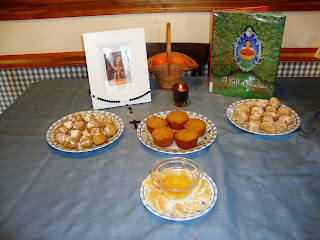 Last week, we thoroughly enjoyed celebrating Our Lady of Altagracia, whose feast day was on Thursday. Some of the things we did were: 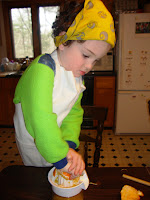 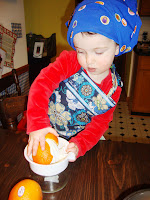 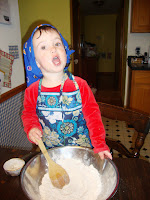 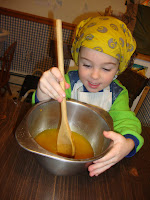 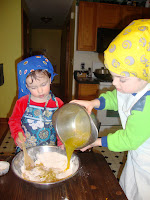 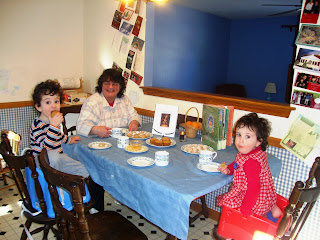 For the tea, I drew inspiration from lots of resources, which I stumbled upon online in the past few weeks. Some of these were as follows:

The result was a simple, lovely tea with Grammy and the kids this past Thursday. First, while Grammy juiced oranges and clementines herself (since the kids were still playing), I laid GG Sullivan’s blue tablecloth on the table (both to dress up the table, making it special with a traditional color of Our Lady, and also to honor GG Sullivan, who I remember so often prayed to the BVM). Then, I borrowed our framed image of Our Lady of Altagracia, library copy of A Gift of Gracias and orange baskets from our Liturgical Table to decorate our tea table. Plus, I added a candle – also to make things special and to remind us of the light of Jesus that Mary brought us when she said “Yes” to God. From there, Nina helped me set the table with plates before we set out orange muffins, orange snowball cookies and clementine segments with orange glaze dip. Luke had already eagerly clambered up to his seat by this point, and thrilled me with a spontaneous “gracias” when we laid the food on the table. I love when he demonstrates learning and manners all at once, unprompted! 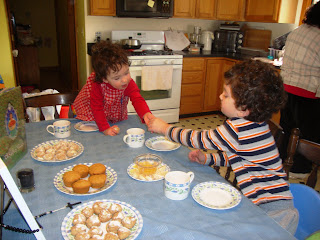 Once all the goodies were laid on the table, Grammy, Nina and I joined Luke, and Nina led us in a Hail Mary. Then, Luke offered that the oranges in A Gift of Gracias grew because the farmers said thank you when they planted the seeds for them. So, we all said thank you to Our Lady for something in our own lives – Luke for oranges, Nina for Jesus, Grammy for time with us and me for sharing our tea with Grammy – before digging into our orange delights. And, somewhere along the way, the kids spontaneously sang “Happy Birthday” – something they tend to do when they see lighted candles. The lit candle also tempted them greatly blow it out, but, after one appeasing blow each, Grammy and I kept the symbolic candle alit by reminding the kids that they had to be patient, waiting until the end of our tea, to blow it out again.


Because I had to leave to go to a prenatal appointment, I missed the excitement of the kids actually getting to blow the candle out after their “long” anticipation. Plus, I missed sharing A Gift of Gracias with them again. Instead, Grammy read the book to Luke and Nina – and, as I hear, loved the story as much as we do. Then, she guided the kids in cleaning up our tea, which, as I later saw, she did with her special touch. Any goodies that were not devoured, were slyly put away so the kids would not be tempted to help themselves to them before Daddy had a chance to share in them and all the dishes and decorations were put away nicely. Gotta love Grammy-led clean up time. She has a way about her...
So, all in all, we had a delightful week of celebrating Our Lady of Altagracia, capped off by a simple, yet meaningful – and delicious – tea. I look forward to making this an annual tradition!

at 9:34 AM
Email ThisBlogThis!Share to TwitterShare to FacebookShare to Pinterest
Labels: Faith Formation, Feast Days, Liturgical Year, Our Lady of Altagracia

HI, I just found your blog when I was googling Our Lady of Altagracia! I a Retablo artist living in NC and I just completed a Retablo of our lady. check out my site and you will see her. www.art4thesoul.etsy.com